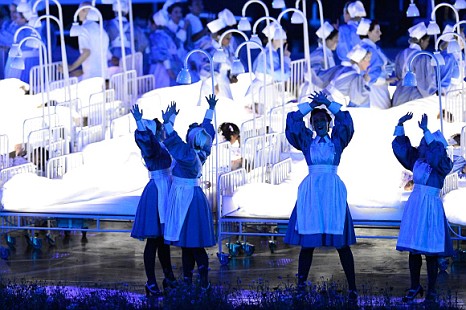 If you’re a small state Conservative, there’s probably nothing worse than having the State dictate the wages of employees like junior doctors. It probably feels like a throwback to the 1970s, with a wages policy, and far better perhaps that the free market should dictate how much people should get paid.

But according to the free market a premier league footballer is worth more than a person who manages a food bank. The sort of economics some of us want us to believe is that the market establishes its own equilibrium for the value of people.

Clearly, if you do not train an adequate number of nurses nationally, you are going to be forced to hire at the last minute loads of agency nurses at an exorbitant rate. But if you believe in leaving it all to the free market, you are probably not a big believer in national planning.

In a completely free market, you could have horse trading between health service providers for doctors and nurses. However, you simply would not have jobs for areas of medicine for niche areas of medicine, in the same way you no longer have train stations for parts of the country where it’s unprofitable to lay down train track.

In a world of supply and demand, how much could junior doctors charge for their talents? This is of course a question of national priorities, where for example you could pay off all the PFI debt in one go in much the same way you recapitalised the banks at the tune of one trillion pounds.

If politicians want to play by the market, unless being totally isolationist, they are playing by the rules of the EU or internationalists. This means in a global economy junior doctors and nurses, in a hypothetical world with no other commitments, are free to move anywhere in the world (provided regulation allows.)

But if you live by the market you need to die by the market – if Australia is paying its staff more, any difference in salaries between the UK and Australia will establish a gradient making migration likely.

The UK would then be forced to have an upward trend in the salaries of its junior doctors and nurses, at a time when it is trying to contain costs. Of course, the austerity in the NHS serves the political function of grinding the NHS to a total halt, while political decisions are made elsewhere to lower the corporation tax.

For this reason, I feel Hunt truly resents being involved in the pay of junior doctors, as ideally he would love to leave it to the market but he can’t. Whilst the mantra of ‘it doesn’t matter who does the NHS work as long as it’s of the highest quality and cost-effective’ is potentially appealing, not having a completely free market yet means that you can not only impose a wage control but also have some china to sell off at some later date.

And I’m sure he resents thinking about the pay of junior doctors; as he knows that doctors, whilst having financial commitments of their own, do already much overtime because of professional duties to their patients not due to their greediness. He knows he doesn’t need increased doctors to motivate the workforce more.

But what Hunt is forgetting is that by not valuing them properly he is in fact making the workforce very demoralised. And this is not good for patients.

← From my vantage point as a junior doctor, I can tell you the NHS is not in a good place The Day judgement reveals either the law needs correcting or public policy on junior doctors is unwell →
Click to listen highlighted text! Powered By GSpeech