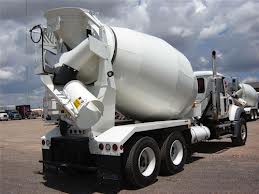 Whilst the machinery of how the operations and strategy work in the NHS may leave many people baffled, even the hardened specialists, patient safety undoubtedly touches us all.

As you’d expect, all registered Doctors, including obviously those with a ‘national training number’ denoting the Doctor has been selected for the demanding higher specialist training, are regulated by the General Medical Council. The statutory duty of the General Medical Council is, inter alia, “to protect, promote and maintain the health, safety and well-being of the public”.

There is therefore a positive obligation on all registered Doctors to promote patient safety, and this includes speaking out on such matters if need be. The regulator’s official line is to be sympathetic to the concerns of “whistleblowers”, but there exists a sad litany of victims who have blown the whistle who have failed to achieve gainful employment ever again.

There has been much concern about whether the Public Interest Disclosure Act (1999) as a statutory instrument is essentially “fit for purpose”. A general consensus is that it, in fact, isn’t.

Benedict Cooper is an excellent article in the New Statesman explains how Chris Day’s specific case has come about.

“It all started one night back in January 2014. Day was working through the night on ICU at Queen Elizabeth Hospital, part of Lewisham & Greenwich NHS Trust. When two locum doctors failed to turn up to work on another ward, Day found himself dangerously stretched having to treat critically ill patients outside of ICU. Under what’s known as ‘protected disclosure’, he raised the matter and urged his manager to find locums ready to come in. It sounds innocuous enough – it’s been anything but since. Why? Because his case has revealed a major flaw in the system; a flaw that has cost him dearly. Unlike almost every other branch of the medical profession, junior doctors aren’t protected when they blow the whistle in the way Day did that night.”

The Chris Day is truly David v Goliath stuff. Health Education England, like the NHS in general, has access to powerful expensive corporate lawyers; and yet lawyers often talk of decisions being made ‘on public policy grounds’ referring, as the former Master of Rolls Lord Denning did, to “deep pockets” and “floodgates”. A consideration, albeit a pretty immoral one, is that Chris Day’s case might open other litigants to take action against Health Education England which has a huge budget.

The actual judgment is as follows.

For me, and I really do go into this with an open mind, the judgement was concerning as to how the decision-making of judgements occurs. There was, for me, a sense of reverse engineering of making the law fit the conclusion the Judge wanted to produce. This is a well known logical fallacy called “post hoc ergo propter hoc” fallacy.

The law always look behind the substance behind the form, so the English law is more interested in what the employment relationship is rather than what is called. It’d have been much more helpful for the Judge ‘to go back to basics’, in thinking about the nuts and bolts about the nature of Day’s daily work as well as his training, through the lens of the seminal Ready Mix Concrete v Minister for Pensions [1968].

The Judge should not have got wound up in detail but should have sought to produce an accurate picture of Day’s daily duties.

Nolan L.J. agreed with the views expressed by Mummery J. in the High Court where he said:

“In order to decide whether a person carries on business on his own account it is necessary to consider many different aspects of that person’s work activity. This is not a mechanical exercise of running through items on a check list to see whether they are present in, or absent from, a given situation. The object of the exercise is to paint a picture from the accumulation of detail. The overall effect can only be appreciated by standing back from the detailed picture which has been painted, by viewing it from a distance and by making an informed, considered, qualitative appreciation of the whole. It is a matter of evaluation of the overall effect, which is not necessarily the same as the sum total of the individual details. Not all details are of equal weight or importance in any given situation. The details may also vary in importance from one situation to another.

The process involves painting a picture in each individual case.”

The Judge then curiously pinned his reverse logic, which of course he is entitled to do as a lawyer of high standing, on what ‘parliament must have intended’.

This is, arguably, the most jaw dropping clause in the whole judgement. 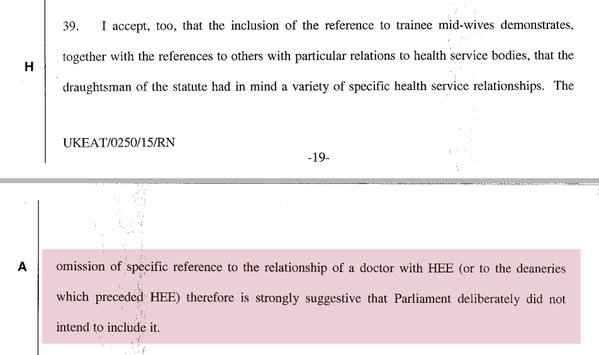 But the law as presented is left with startling lacunae, if the Judge is definitely correct.

Take for example this observation from Day himself on Twitter:

This based on the issue that s.43(k) Employments Right Act gives protection for a student nurse watching the operation ‘whistleblowing’, but not the doctor himself on the Specialist Register doing the said operation.

Normally, even the most junior law students would be advised to seek out any statutory aids to help to guess what Parliament might have intended. But only one year previous to the Employment Rights Act (1999), parliament enacted what it thought was extensive protection for whistleblowers, including in the NHS, in the Public Interest Disclosure Act (1998) as discussed here. Therefore, the same parliamentarians, led by the first Blair executive, were responsible for both statutory instruments. It is therefore inconceivable that it could be intended that junior doctors in training would be given protection in one statutory instrument, but not the other.

Furthermore, in response to the lengthy well articulated submissions on behalf of Dr Chris Day concerning article 10, freedom of expression, the Judge provides barely any discussion at all. This dismissal of fundamental human rights, brought into our domestic law through the Human Rights Act (1999), also legislated for by that first Blair government, is staggering.

The Supreme Court recently had to correct the law as interpreted by the lower Courts on joint enterprise. It is not inconceivable that they will have to correct the lower courts again this time on the Day case. But it is an important policy point – that registered medical doctors in training, despite having a duty to promote patient safety, are not protected in doing so. At a point when Jeremy Hunt’s popularity arguably is at its lowest ebb, his special advisors could do no worse than to encourage Hunt to correct the legislation urgently, a low hanging fruit that would make a huge difference on principle even.

← Jeremy Hunt, I’m sure, resents being involved in junior doctors’ pay In a game of ‘who will blink first’, many of us are bound to be losers →
Click to listen highlighted text! Powered By GSpeech