By shibleyrahman in Uncategorized on July 31, 2016.

This is Jeremy Corbyn MP in the Leeds Rally.

This is Owen Smith MP elsewhere. 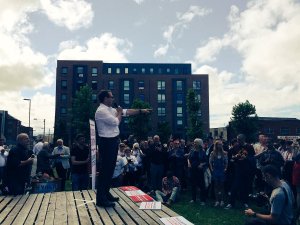 I’m actually an academic in dementia, and the structure and function of social movements is in reality a very large part of my work. What I have read in tweets from certain Guardian journalists beggars belief, and identifies for me that they don’t know anything about social movements.

Without going into what a social movement is these days, which would be quite turgid and potentially hugely boring, it’s perhaps worth nothng what it isn’t. I’ve seen the term misapplied to a group of people buying the same product or engaging in the same project, and mass tweets about it. That’s not actually a genuine social movement – that’s “groupthink”, where much of the hard work of the marketing is done by the self-explanatory ‘bandwagon effect’.

Genuine social movements, such as the response to Dr Martin Luther King Jnr’s iconic ‘I have a dream’ speech, occur when a group of people are able to click with a certain set of issues, communicate with one another a strong sense of bonding and motivation to action on those issues, and then want to do something about those issues.

Whatever you think of ‘Momentum’, and bear in mind I’m not a member of Momentum nor even been asked to join, for the parliamentary Labour Party this ability to mobilise and organise is terrifying. You only have to look at the pictures of empty pews for sermons by Owen Smith to witness quite how embarrassing the Owen Smith campaign has become. One person to me said ‘it must be humiliating for him’.

Owen Smith MP strikes me as a hugely pleasant man, stripping away his involvement in recent events. I think to glorify the present leadership election as a ‘contest’ is hyperbolic – it is more like a wimpish dare from Owen.

I get Owen’s belief that he is following in the footsteps of Nye Bevan. But bear in mind that Nye Bevan himself got expelled from the Labour Party;

I find it quite humbling that he perceives himself as a socialist. I have often fessed up straight away about my total lack of definition about what socialism is, but I recognise it when I see it. Owen makes the right noises, such as “100% public ownership” of the NHS, but it’s what he doesn’t say which probably raises alarm bells for me the most – such as the rôle of private finance in “the new deal”, or what he would feel about free trade, multinationals and the NHS.

Yesterday I took to YouTube to watch the initial reactions to the general election victory by the Conservatives in May 2015. Labour MPs, one after another, appear shell-shocked. They genuinely believed that they could and would win with Ed Miliband?

But remember – this was also the election where the Shadow Chancellor, Ed Balls, lost his seat, and Scotland went down from 41 Labour MPs to 1.

I knew Labour wouldn’t win. I have voted Labour for 26 years. I even accidentally went to Margaret Thatcher’s last ever Question Time, a stone’s throw away from my school in London.

I am physically disabled. I felt a real disconnect with how the Labour Party in parliament went about their business – they wanted to send out the signal that they could be trusted with the economy, despite never wishing to discuss how even national debt had ballooned under Osborne 2010-5. And they appeared prepared to support the Conservatives for their plans for belt tightening, even if that meant hundreds of thousands of disabled citizens like me would lose their benefits on ‘reassessment’ or it meant that the NHS could continue with its idiotic ‘efficiency savings’.

I watched one interview given by Chuka Umunna MP where he identified the main issue as the failure of ‘aspiration’. And this was a theme which was to be used again and again by the failed Leadership candidates in 2015. You see, Labour failed to pledge to reverse the annihilation of law centres and legal aid following the Legal Aid and Sentencing and Punishment of Offenders Act 2012, meaning access to justice being strangled at the neck. This is not just failure of aspiration for me – it is a real poverty of ambition from the parliamentary Labour Party, as then was, which appeared to wish to be able to continue seamlessly with Conservative policies.

Lord Mandelson whilst coming to praise Ed Miliband also came to blame him on the Sunday Marr show after the thursday general election. He laid the blame directly at the foot of Ed Miliband rejecting New Labour. Mandelson said that this was a mistake, and Miliband should have ‘reinvigorated’ New Labour. Aside from whether you wish to do CPR on a dead corpse, I think this shows complete lack of insight and political acumen.

One thing Diane Abbott MP and Chuka Umunna MP did agree on, however, in their interviews for the BBC that week was a need for a ‘wider debate’ and for Labour now to grow as a ‘social movement’.

And whatever you think of Jeremy Corbyn – and I’m aware that some of you think he’s a misogynist, anti-Semitic, pro-terrorist bastard – he has produced a wider debate, whether that is on national infrastructure and the urgent need to build social housing, a publicly owned NHS, getting rid of PFI, cracking down at long last on aggressive tax avoidance, tackling the deep rooted problems in social care, and so on.

This could be interpreted as the Labour moving left-wards, and if imitation is the best form of flattery, Corbyn must be extremely flattered by the wholesale plagiarisation of the policies by Owen Smith MP.

The thing is – what Lord Mandelson and Blair wanted was a centre-left ‘middle of the road’ candidate who could make their type of policies, supposedly pro-growth, pro-wealth creation, pro-aspiration blah blah blah, palatable. They were not expecting Owen to wholesale copy policies which could be incontrovertibly called left wing (such as 100% public ownership of the NHS). The argument is that Labour Party will trick and dupe the country into voting for Owen, as he is the ‘acceptable face of Corbynism’, but I think this is yet another example of the Labour Party PLP treating the general public like idiots.

Did Seema Malhotra MP really expect nobody to question why she had been sat squatting in her office for two weeks having resigned? Instead nasty vindictive smears emerged against a widower with a single job who happened to work in John McDonnell MP’s office. Or does Jess Phillips MP really think she is the best advocate for a ‘kinder form of politics’, when she once boasted of stabbing Corbyn in the front not the back? Or does Jamie Reed MP think he can get away with a question in PMQs, widely interpreted in the mainstream media as trying to humiliate the leadership of Labour, just minutes before Andy Burnham MP, Shadow Home Secretary, gives a serious statement on Oregreave?

The Labour Party PLP and Owen Smith MP have tried to market their way to success – and have failed.

The vast majority of the Labour MPs are clearly deluded if they thought, all 171 of them, that they could ‘force’ Corbyn to resign, against the rules.

In fact, if you read the judgment against the Labour donor last week, it states specifically that the reason that the rules are unambiguously interpreted in Corbyn’s favour is due to the simple fact that Corbyn did not resign.

And it will play out again in the courts next week.

Will the Court view the sudden rule change by the NEC regarding membership and voting to be lawful? I think a fair legalistic appraisal of the situation can find there’s been a breach of contract. Fresh Labour members sign up to clearly identifiable terms and conditions on the website, which makes reference to the Rule Book and the Political Parties, Elections and Referendums Act 20000. Voting is clearly a membership activity.

Is there a contract of membership with Labour as a political party? Yes, according to clause 2 of the High Court’s own judgment last week delivered in the Strand, making reference to a case of Chaudhry and Ors v Treisman, which made interesting reading for me at 3 am.

The question though is what the High Court will then do about it. The remedy in contract law tends to be damages – so one assumes the NEC will simply be asked to reinstitute voting rights or to give these new members a refund. Restitution in English law is relatively rare, however (though do see the Spycatcher case.)

It’s suddenly got very ugly, as the Labour Party PLP will now finally realise they can’t bully the membership into getting their own way. The final throw of the dice and die is to threaten a split and for the failed Labour Party MPs to get the name of ‘Labour’ – but this is desperate stuff. Ugly stuff – and entirely to be predicted when social movements defeat marketing.