By shibleyrahman in Politics on September 25, 2017. 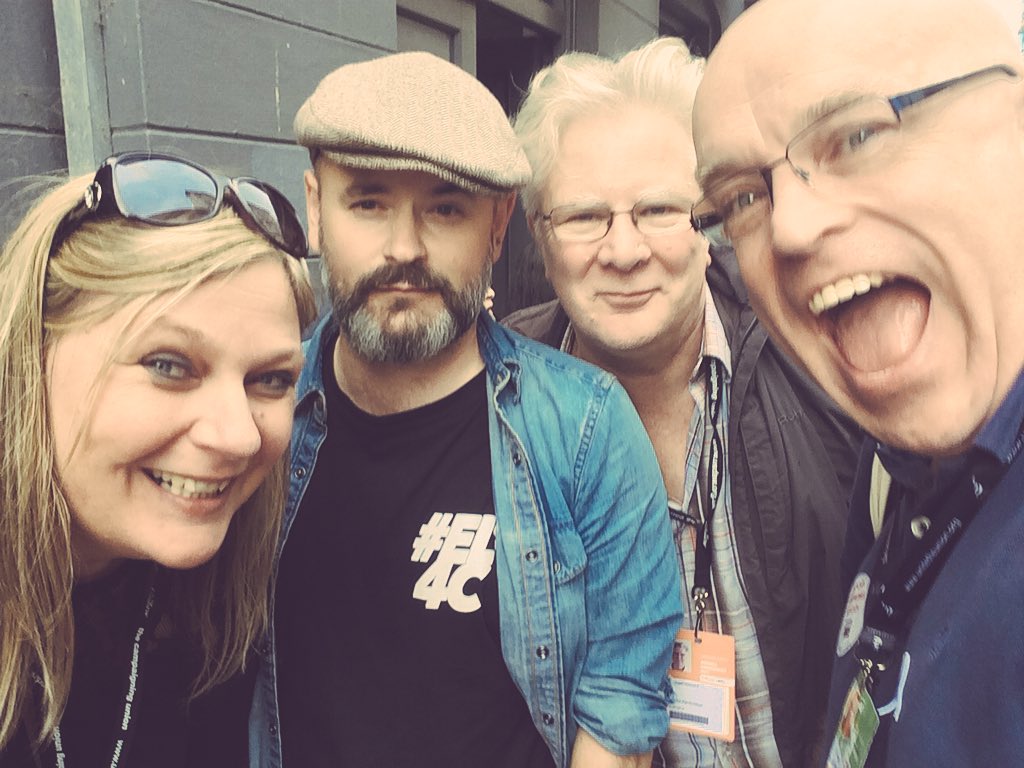 As Emily Thornberry said this morning, “There is nothing stronger than a person of principle…. Thanks to Jeremy Corbyn’s inspirational leadership, and the efforts of all the people in this room, it’s time to put Labour values back into government.” Everything has now in fact changed. This is not merely because the Conservative party, and their bullshit such as £350 million re-invested in the NHS, is a ‘busted flush’. It’s much more than that. I first went to the Labour party conference in 2010 in Manchester. It was in fact a few months before my father was to die. I remember my time there crystal clearly. I remember meeting John Prescott for the first (and only) time in a curry restaurant in the Curry Mile, and various people who were both very young and very energised about being in the Labour movement. David Prescott kindly helped me across the street, avoiding being run over by the trams. I had become newly physically disabled at the time, due to meningitis. In fact, I remember going to a fringe event at breakfast time in Manchester Town Hall on the subject of how to engage ‘missing voters’. Ellie Mae O’Hagan was there. Some brilliant contributions from Matt Zarb Cousin stuck in my mind. I wonder what happened to him.

At the time, I was in the ‘top ten’ Labour blogs. But now is much better. I think this Labour conference in 2017 in Brighton is full of optimism and hope. Labour for the first time in ages, I feel, has a realistic chance of being the party of government. I think we very mostly agree Jeremy Corbyn has turned ‘pro’. He batted away questions on striking from Andrew Marr with amazing ease yesterday morning. The hacks have made it an open secret that they have no conflict to discuss. The observation that Brexit is not one of the motions for debate is the only thing that desperate hacks can cling onto, but you only have to look at the list which has emerged – which includes the NHS, social care, growth and investment and employment issues – to see that there is no existential crisis in the Labour Party. Not at all. It is a party which is prepared to govern for the many, not the few.

The Tories’ economic model of delivering shareholder dividend with rocketing prices, suppressed wages with inflated cost of living, is not appealing to the vast majority. The ‘work til you drop’ approach is terrifying. The way in which disabled citizens have lost their personal independence payment is nothing short of the ultimate in unacceptable morally. Corrupt capitalism has had its day. Grenfell paid testament to that. Outside of the hall, it is very clear that many delegates have been speaking to some of ‘the many’. There has been a strong sense from speakers from the floor to speak out about issues of social justice, in the quest for equalities and fairness. There has been reference to homeless people, which Tony Benn famously used to congratulate market forces for. There has been a clear drive to reset the narrative to appreciate and value migrants and asylum seekers. The Momentum festival has been well received. There is no sense that Polly Toynbee needs to visit it to provide it with external validation. Trade unions defend public services, campaign to prevent abuses of workers and employees, and are no longer a ‘dirty word’.

I voted for Jeremy Corbyn twice as leader of the Labour Party, and, like many, it is tempting not to forget so easily the time which has been wasted in setting out the case for Corbyn again and again and again, the carping and criticism from 170 or so Labour MPs, or the whingeing from senior people in the Labour Party keen to ‘blame’ Corbyn for Brexit. Nor is it quite so easy to forgive and forget the amount of time, effort and money taken by the NEC to stop people voting for Corbyn as leader out of fear that all the new members of Labour were Marxist throwbacks from the 1980s. But the surge in membership of the Labour Party is entirely genuine, making Labour a massive democratic party. This is an especially amazing achievement, given the context of how parties such as ‘Alternative for Deutschland’ with an anti-Muslim and anti-migrant, far right, agenda have garnered support to fill the ‘political space’. True that the Labour Party is not entirely a socialist party, although it has socialists in it. But it is also true that there are many more people are loud and proud to be associated with the socialist ideals and values which have been promoted by the current leadership of the Labour Party.

Whilst the ‘we want a Jobs first Brexit’ is in danger of being a vacuous phrase, there’s no doubt about the dependence of certain sectors, not least the NHS and social care, on EU citizens living in Britain. If it turns out that the Conservatives are simply unable to negotiate a meaningful settlement with the European Union within two years, it is quite possible that the Labour Party will have to do something drastic about deciding upon a post-Brexit future. Jeremy Corbyn openly explained on #Marr yesterday that it was possible that state aid rules had not made it possible to intervene in industries as he would have liked, and actually had helped to privatise certain industries such as rail. It wasn’t that long ago, after all, that there had been concerns about how TTIP might stitch up a trade deal with the US over the NHS, but now the threat to the NHS from Donald Trump and Jeremy Hunt is far greater. Free movement of workers has had problems also with employees, particularly of multi-national corporates, effectively leading to wage suppression, but this fundamentally was always a problem presented by employers. But Labour is well aware that the UK economy could easily tank on Brexit especially on leaving membership of the signatories to the rules of the “single market” or “customs union”, and the devaluation of the pound sterling and exodus of jobs abroad are both already alarming. But if you think to choose who you want driving the car – Boris Johnson, David Davis and Priti Patel or Sir Keir Starmer, I know who I prefer.

Members of the media have consistently been spitting bullets at Corbyn. James O’Brien on LBC spent substantial daily effort into rubbishing Corbyn. The 2017 Labour manifesto was a massive triumph, propelling Labour to its largest vote this century. The Tories claim they even put Jeremy Corbyn on the ballot paper the first time around. Various people sneered at the rallies held by Corbyn across the country, claiming simultaneously that Corbyn had a ‘bunker mentality’ which prevented him from meeting the general public, and saying that there was no such social movement. But it is clear that there is something material and significant happening under the RADAR, as Jess Phillips, Clive Lewis and Laura Pidcock are treated like rock stars rather than members of parliament. Paul Mason, I remember, was often criticised for claiming that “strong and stable” Theresa May would not be returned with a stonking majority, and Paul Mason’s views and opinions, for example, on topics ranging from tuition fees to bellicose nuclear speak from Donald Trump are taken with considerably more gravitas than other commentators. The whole team are pretty awesome now, including Barry Gardiner who is prepared to call out people talking nonsensical crap.

Gains such as Canterbury and London Kensington and Chelsea have been amazing. Amber Rudd’s seat in Hastings is now up for grabs. Nobody can fault how amazing Andy Gwynne has been. Of course, much blood has been spilt and this is to be expected from a broad coalition of sorts.  I no longer speak to the Socialist Health Association because of their open support for marketization of the NHS, PFI and Owen Smith. Tom Watson is no longer on Len McCluskey’s Christmas card list. I think critics within Labour have really got the work cut out if they wish not to help Jeremy Corbyn and the Labour party prepare for government. You can tell from the reception to the limp interventions from Ben Bradshaw and Heidi Alexander over the single market that they are not the future now. But supporters of Labour fundamentally know that they did not introduce austerity. Vince Cable, on the other hand, did. The Liberal Democrats cannot be absolved from their blame on the bedroom tax, either.  The Fabians, with their star turns, are having trouble trying to reverse the deluge of criticism they have doshed out to Corbyn and colleagues. The Twitter community, with Chunky, Rachael, Steve, Matt, Tom, Peter, Liam, “Scouse Girl”, EL4JC, Michael, WowPetition, Éoin, Matt, Ellie, or Paul, of course going from strength to strength. Labour’s policies speak to the concerns of the many not the few – such as personal debt, only today, being worked up by John McDonnell and Rebecca Long-Bailey. I agree with Jeremy Corbyn that he will need at least two terms of government to get the UK back on course, but there is a real sense of energy, positivity, drive and optimism which means that Labour and its social movement deserve every success.

← Are we there yet? The road to the dementia cure is paved with biomarkers. Time to call out dementia friendly cronyism →
Click to listen highlighted text! Powered By GSpeech