Theresa May’s campaign is the pits 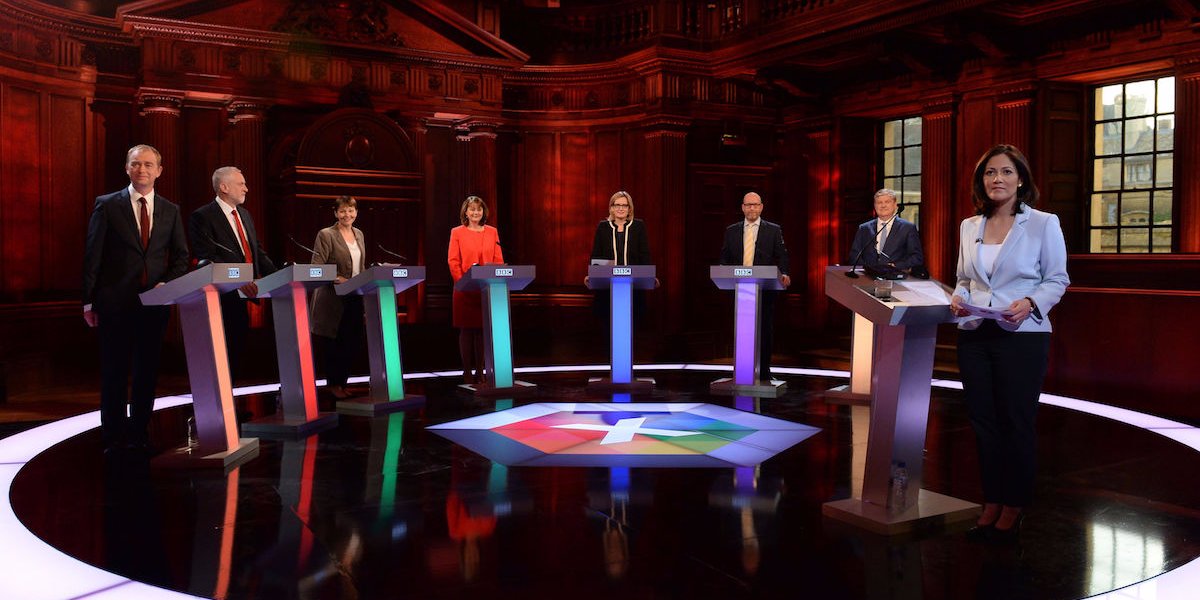 As for last night’s debate…..

Love an election in the Twitter era. It’s like seeing a fight in the playground and then getting to read all the bitchy texts too #BBCDebate

For all the criticisms of Jeremy Corbyn’s “incompetence”, Corbyn managed to nail it today. He referred to Theresa May as inciting “pumped up animosity”. Theresa May has not been able to give even the most basic details about what future cuts are in store from the failed austerity of the Conservatives, nor what ‘no deal’ in Brexit without inclusion in the EU single market would actually mean.

The Conservatives are now very exposed indeed. Every one should be concerned about the lack of vision of Theresa May for the future of this country. And to be honest quite a few people have not treated with Jeremy Corbyn with the respect he clearly deserved as twice democratically-elected leader of the Labour Party. Journalists are incredulous that Jeremy Corbyn has staged an ‘astonishing comeback’, but to be fair to Team Corbyn the narrative was likely to change if the narrative switched from personal attacks on Corbyn to a focus on policies.

Even that rule book is in tatters through exposing the truth about Tory economics.

I absolutely adore this video – and the tragedy is that it's entirely accurate.
ht. @Rachael_Swindon pic.twitter.com/KqiloudMMq

As for the ‘rule book’, Jeremy Corbyn has thrown out the doctrine that campaigns are irrelevant – something which Spencer Livermore is said to believe in. The argument goes that if the mood music has been sustained for long enough no amount of campaigning will make a difference. This is of course what the toxic parliamentarians in the Labour Party has relied on. They had hoped that Jeremy Corbyn would put in such a disastrous performance in this snap election that getting rid of Corbyn would be like taking sweets off a child following the result on June 9th.

The latest poll finds that Labour is closing the gap with Tories and now stands just three points from Theresa May’s party, a new YouGov poll shows. The poll, commissioned by The Times, found the Conservative lead has slipped dramatically in recent weeks and is now within the margin of error. I am deeply ashamed of the reaction to Emma Barnett, but that interview for me shone out for how Jeremy Corbyn dealt with, with dignity, to not knowing a particular election costing. Barnett’s attitude appeared to be one of someone wanting to slip you up and humiliate you, and I very much oppose this. This is the same approach which saw the parliamentary Labour Party in large part 2015-7 decide to strangle Corbyn’s leadership rather than nurture it.

The figures show the Conservatives on 42 points but Labour are close behind on 39. This has only been possible from the barrage of lies from the Tory media. Meanwhile, the Liberal Democrats are struggling to maintain the momentum of their “fightback” as they slip to just 7 per cent vote share. Based on last night’s ratings, it was calculated that Theresa May was knocking on at least 648 doors a second to have the same reach. May is already in a worse situation even she wins the general election, as her brand has been exposed for what it is. An uninspiring, shower of a shit-storm of boredom. Could throwing away a 20% poll lead soon mean for Theresa May that “exit means exit”? The knives are certainly out.

The fact that Sir Lynton Crosby has taken sole responsibility for the election, according to Newsnight’s Nicholas Watt, and when Crosby tells them all to jump the only query is ‘how high’, means that Theresa May has become nothing other than an actor speaking her lines. And if Theresa May stays as PM, as the continuity candidate, Jeremy Hunt will continue to dismantle the NHS. May will lie at any cost to keep her job. She maintains the myth that she will be conducting the negotiations, when it is clear that someone else like Boris Johnson or David Davies will do it. Corbyn has clearly already said that Sir Keir Starmer QC would lead the negotiations for the Labour Party. The campaign does matter. Jeremy Corbyn is now London’s favourite candidate. The policies of the Labour Party are more popular than those of the Conservative Party.

I couldn’t agree more with John Prescott. The #BBCDebate showed us the Conservatives with their non road tested ‘leader in hiding’ making any old stuff up, talking about a long term plan without actually having one. Theresa May’s ex-communications chief has penned a devastating critique of her former boss’s botched social care U-turn, which knocked the Tory election campaign off course. Katie Perrior said the ground should have been laid to publish the policy weeks in advance, but it was instead “whacked out in a manifesto and briefed the night before”. She also said those in charge of the Conservative campaign had failed to manage lofty expectations of a landslide when it first launched.

The whole campaign of Theresa May has had the content and style of a bucket of cold sick. “Strong and stable” Theresa May is instead “Incredibly dull and robotic”, with stunning U turns on whether to call the election, or the Dementia Tax. The Conservatives are riding on a stench of entitlement and arrogance, which means they don’t care that their school meals are costed at 7 p per person. All of this does leave an impression about what kind of a leader Theresa May can be for us. As someone noted earlier from ITV, she actually refuses to answer any questions (for example how many people will have their winter fuel allowance taken away, or what the upper cap of the Dementia Tax will be.) Theresa May thinks that the voters can yet further cope with a week of more of this drivelfest. It is possible that some basic mixup of communication meant that Theresa May simply got her wires crossed, and did not turn up to the Senate House in Cambridge because the event was not being held in a cold warehouse or factory with pre-packaged Tory stooges. It’s actually even worse than that.

For all the criticisms of Jeremy Corbyn’s leadership, the expectation for Corbyn was set so low that Corbyn’s subsequent performance has subsequently been hailed as incredible. And for Corbyn’s supporters he is genuinely worth supporting. On the other hand, but Theresa May gives a strong impression of NOT wanting to answer questions directly and even telling the truth. I don’t know about you, but if I didn’t show up to the job interview, my prospects may be limited. If Theresa May does not happen to win the general election or to increase the size of her majority, questions will be asked about whether her ‘no show’strategy was fair to voters. On a practical point, one is entitled to think May stayed away from the #BBCDebate because every time she opens her mouth the polls for Tories drop another a few points. Her performance is genuinely shambolic, and this is of no particular surprise as she has not ever been properly ‘road tested’ apart from the Conservative Party and Laura Kuenssberg.

But in the real world, Theresa May is shambolic. Right wingers are obviously entitled to claim that last night’s audience was left wing biased, presumably because there wasn’t a fair number of Saudi Arms dealers. But in ComRes’ defence, the demographics of the audience had been meticulously worked out. A big problem now is that Theresa May is seen as a weak leader, as she couldn’t be bothered to turn up to the #BBCDebate. She therefore has no moral authority to attack Jeremy Corbyn for his leadership, when in fairness Corbyn’s answers on leadership (ranging from not being a dictator to the importance of listening) have been impressive. People are now not laughing with Theresa May, but laughing at her. The lady is not even for turning up.

Yep it is incredible that she’s busy losing the biggest lead in election history.

Even Corbyn ‘dark past’ smears are now longer working with an electorate who are more worried that the Tories wish to continue with their disastrous NHS and social care policy without batting an eye lid. With all the added scrutiny, the Tories and their journalists are not so vocal about their support for Apartheid quite so much any more.

Amber Rudd was laughed at during the #BBCDebate when asking the audience to trust the Tories “on our record”. Caroline Lucas, who is fast being recognised as a leading light in the new progressive alliance, was right to allude to how defending arms sales to Saudia Arabia as a strong economic benefit is a perfect illustration of how Tories value profit over people, and is morally indefensible. I agree that many people probably know little of the ‘money tree’ apart from a stick with which to beat the Labour Party. But a party which has progressing towards doubling the national debt in recent years is not in a good position to lecture on basic macroeconomics. The UK economy due to the flawed foundations of George Osborne, of poor productivity poor employment rights ‘gig economy’ is currently a busted flush, as today’s disastrous global figures how.

Voters are no longer falling for these pumped up lies from the Tories on their economic policy – for instance, economic growth, two words absent from Tory economic policy, act as ‘a money tree’ as does fair and equitable redistribution of income/wealth. Drinkers at the last chance saloon toasting to fundamentalism of supply side economics have received their last orders. The real money tree is well known to many victims on the left of course. These include dozens of Tory donors ending up on the Sunday Times rich list, Tories turning up in the Panama papers, a deficit not fixed not predicted to be fixed until 2025 now despite of cuts, 4 out of 5 NHS trust in deficit, a Tory manifesto where the only figures are the page numbers, and billions lost in tax avoidance and evasion. Theresa May is a busted flush.

“The first rule of leadership is to show up”, as Caroline Lucas said.

The policies are popular of the progressive left are popular, and the contrast with the ideologically barren Conservative Party could not be more stark. The proposed programme for government for the Labour Party is as Angela Rayner alluded to is a continuation of ‘unfinished business’ from the previous administration of the brilliant Clem Attlee, who made the NHS a reality, introduced child benefit, nationalised the bankrupt private railways and introduced free secondary education as a right, and many other staggering achievements.

There is no vision with Theresa May.

She is deeply dull and boring.

Thinking of voting #Conservative? I have until now! See through the lies and empty promises. #GE2017 #BBCDebate #VoteLabour #SaveOurNHS pic.twitter.com/zlQUz5EvFV

I feel quite sorry for the person on Twitter who thinks “lefty” BBC is funded by the European Union. I can only assume that he is not paying his license fee. It is of course deeply patronising of Tories and the Daily Mail to tell us #BBCDebate was biased. We can judge that ourselves.

It is now patently clear that too much right wing opinion dressed up as news. And some news or opinion is being given a disproportionate amount of attention. The fact that UKIP are given such platform without an MP at all lends UKIP a credibility they do not deserve. The idea that the #BBCDebate was merely “echo chamber for left-wing views” is entirely risable.

The ConKip brand most definitely has very limited appeal.

Theresa May is trying her very best …

.. to completely blow this election.

← Theresa May’s team must be congratulated on a dire campaign which has failed to inspire It is worth remembering that Theresa May could still be on course for a landslide →
Click to listen highlighted text! Powered By GSpeech