Home » Politics » Mayism is dead. Let’s give this political mayhemism nil points, and move on.

Mayism is dead. Let’s give this political mayhemism nil points, and move on. 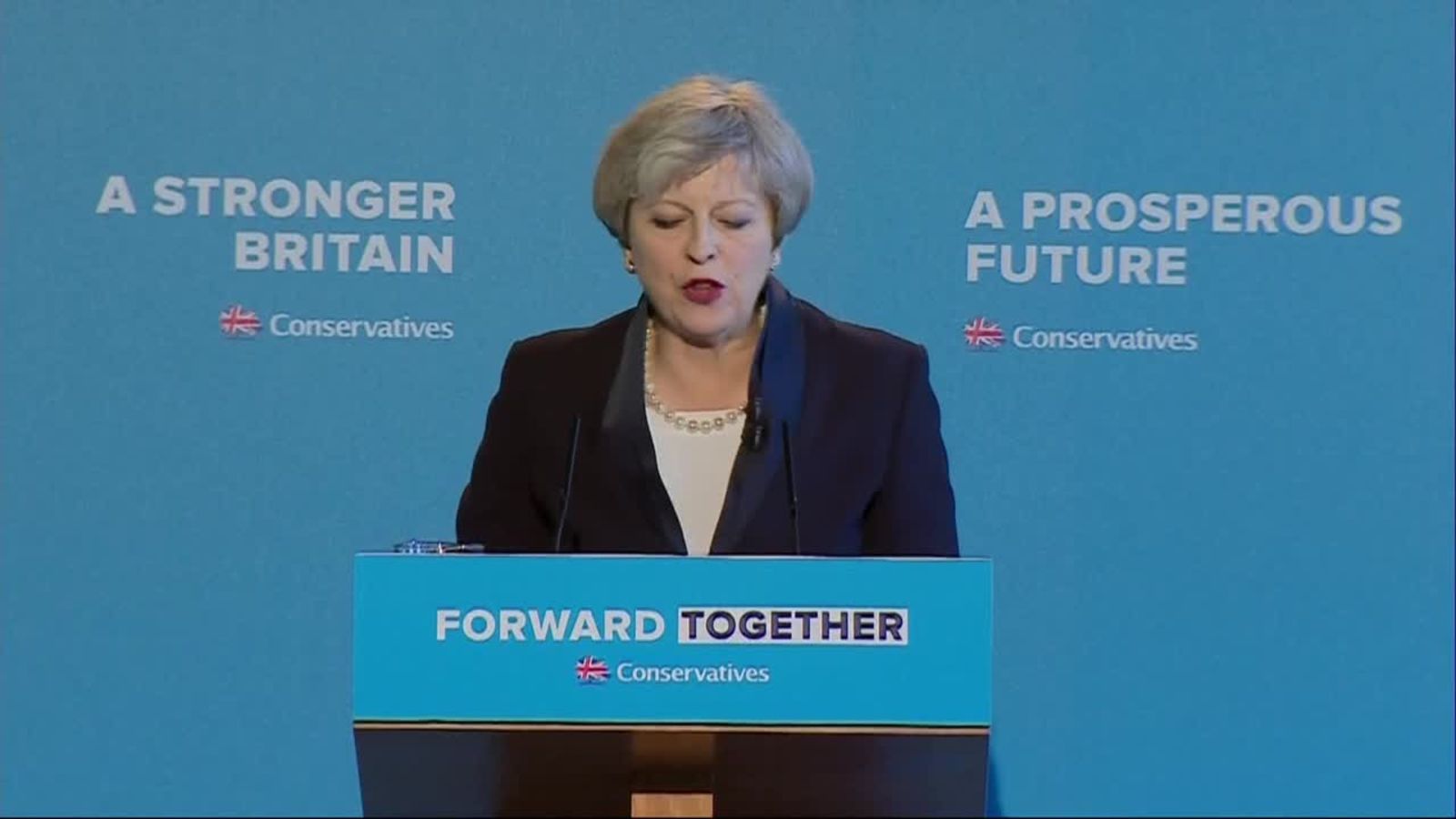 We now know that if Ed Miliband indeed had a million conversations at the time of the 2015 general election he was not very good at acting on the answer.

Before Jeremy Corbyn came along for the (two) leadership elections, the Labour Party was immersed in a smorsborg of banality.

Let me make a powerful confession.

This doesn’t make me a Corbynista or Corbynite. I am interested in winning elections. That would be totally counter-intuitive, IF I were interested in politics and I was disincentivised by success.

There has been a cruel, vindictive criticism that people who ‘follow’ Jeremy Corbyn are in a cult.

First thing to say is that it is not uncommon for leaders to have followers.

Second, Corbyn would not be the first person to want to be popular.

Look at Tony Blair and Peter Mandelson who were ‘intensely relaxed’ about being chummy with friends in the City or Republicans in the United States.

And talking of cults.

What is Mayism?  Journalists were so busy fawning over Theresa May at the launch of the 2017 manifesto document, they embarrassingly forgot to listen to the answer.

The answer, incidentally, began in a Thatcher-esque baritone, “There is no such thing as Mayism”.

Soon there’ll be no such thing as society – nor even the United Kingdom, if the Conservatives carry on with their direction of travel.

As it happens, I don’t think Corbyn likes rallies because he is ‘popular’. He is probably happy with ‘preaching to the converted’ as his narrative is genuinely what he believes in. His voting record shows that.

Corbyn recently made it clear he gets paid generously for what he does, but more or less implied he gave it away to good causes without saying so as much in a recent TV interview.

My late father used to warn me that bad dancers always blamed the floor – that is when I tended to blame anyone but me for my triumphant mistakes.

But it is true that the David Cameron and George Osborne era has largely escaped meaningful criticism.

That is even though the legislative reforms of Lansley on the NHS or Iain Duncan Smith on welfare reforms have been both costly and catastrophic.

All the people who spend everyday criticising Jeremy Corbyn in the Guardian should remind themselves of where Labour came from in 2015.

And meanwhile Tony Blair said, “We must own the future. We must make the future our comfort zone.”

To give Blair credit, there were some very important achievements too in his period of government.

John Cruddas’ post mortem was, “We should now go to some very dark places to find out what went wrong”.

And Liz Kendall MP’s pitch in the first Labour leadership made a pitch for leadership on the basis of the fact she went to school in Watford.

I campaigned for Ed Miliband in the 2015 general election. I voted for Tony Blair three times as leader. I have voted Labour all my adult life, every general election since 1992.

Now that we have a twice democratically elected leader, I would suggest something to senior members of the Labour Party.

Your time with us is temporary.

The Labour Party collectively is more important than you.

I will be voting for Jeremy Corbyn. I have always supported the democratically elected leader of my party. I think it is simply unforgiveable and unprincipled for Kezia Dugdale, John Woodcock or Ben Bradshaw if they are going round their constituencies telling people to vote Tory.

Blair,  Brown and Ed Miliband all had one important thing in common.

They left the ideology of the Labour Party in a mess. I would go so far as to say they left it in a vacuum, which might explain why so many in the UK voted to leave the European Union.

But the Guardian, and senior political editors at the BBC, have made it into a passion criticising Jeremy Corbyn in an amazingly comprehensive hate campaign.

They are so keen on this hate campaign, they would not mind if this country went to the dogs.

We are where we are with Brexit.

The Liberal Democrats insist that they are not ‘re-running Brexit’, but they do want to put to some sort of vote what our post Brexit existence could be or should be.

Indeed, whilst those who voted in the EU referendum in the most part wanted to vote out of the European Union, there is currently no clear mandate on leaving the single market.

If Labour or the Conservatives do not win the 2017 general election on their own, it is possible that the race becomes one of a race between (Tory and LibDem) or (Labour and SNP).

We can assume that the Conservatives have mentally written off the idea of ‘paying back the deficit’ on their third attempt (by 2025).

This incidentally is also the year David Cameron and his colleagues in big charity have promised to deliver a ‘cure for dementia’.

Labour  had become triangulated, up until and including the departure of Ed Miliband, to ‘paying off the deficit’.

But that led to annihilation of any enthusiasm and vision under the Labour membership.

With the ideology of ‘paying off the deficit’, everything else follows – including making the State totally underfunded. Cuts and austerity have been euphemistically dressed up as efficiency.

This current general election in 2017 is truly astonishing.

Theresa May wants to use the 2017 general election as a blank cheque for a ‘small state’. This explains why May does not consider it important to deliver a universal entitlement on winter fuel payments or to deliver an elderly care system where we pool risk equitably.

Is it ‘patriotic’ of May to put people with dementia on the financial breadline in this way?

Jeremy Corbyn and John McDonnell, on the other hand, have produced a brilliant vision for government – whether you agree with it or not. It is fully costed – none of the 60 promises in the Conservatives manifesto have been costed, and the overwhelmingly right wing media do not care.

The double standards further extend to Jeremy Corbyn and John McDonnell allegedly being ‘terrorist sympathisers’. So why did Michael Fallon go to meet the dictator Assad in 2007?

Whatever you think of Jeremy Corbyn and John McDonnell, they have taken the level of debate much further on the risable twaddle from years ago.

The first question after George Osborne’s omnishambles budget from Nick Robinson was, “Prime Minister, have you ever eaten a Cornish pasty?”

Ed Miliband, and his shadow cabinet, were control freaks. None of them could ever go passionately off message. Take for example their tortured messages on the ‘cost of living crisis’.

The tragedy, however, was that Ed Miliband was also right in his way too.

This year, prices will far outstrip wages. There is definitely a phenomenon called ‘the cost of living crisis.

And we know that the energy market is broken. The inflated prices from large oligopolies demonstrating near monopolistic behaviour show that.

Ed Miliband recognised that too.

Even ‘Red Tory’ Theresa May recognises the housing market is ‘broken’.

However, we know that her superior, Mrs Thatcher, perhaps referred to as ‘selfishly individualistic’ in May’s manifesto, sold off the housing stock.

Now Maggie’s children are having to sell off their houses to pay for their own elderly care, because successful governments obsessed with a small state and free movement of capital have neglected to safeguard the infrastructure.

Let’s vote May out, and then we can discuss what ‘Mayism’ is at our leisure.

A few days ago, somebody aged above 70 said he would not be surprised if Labour actually defied the odds – like when Clem Attlee won in 1945 with an extraordinary vision, when good Mr Churchill was expected to win.

Strong and stable? My arse.

I think it is time to give the robotic ‘strong and stable’ Theresa May the boot, and send a giant rocket to her equally unappealing and unimpressive Cabinet.

This is not a once in a lifetime opportunity.

This is a once in many lifetime opportunities.

Even if the BBC and Guardian can’t be arsed to give you the facts about the manifestos (sic), seize the opportunity to divert the UK from being an offshore banana republic off the shores of the European Union.

Time to give Theresa May ‘nil points’.