Book review: “Your life in my hands”, Rachel Clarke 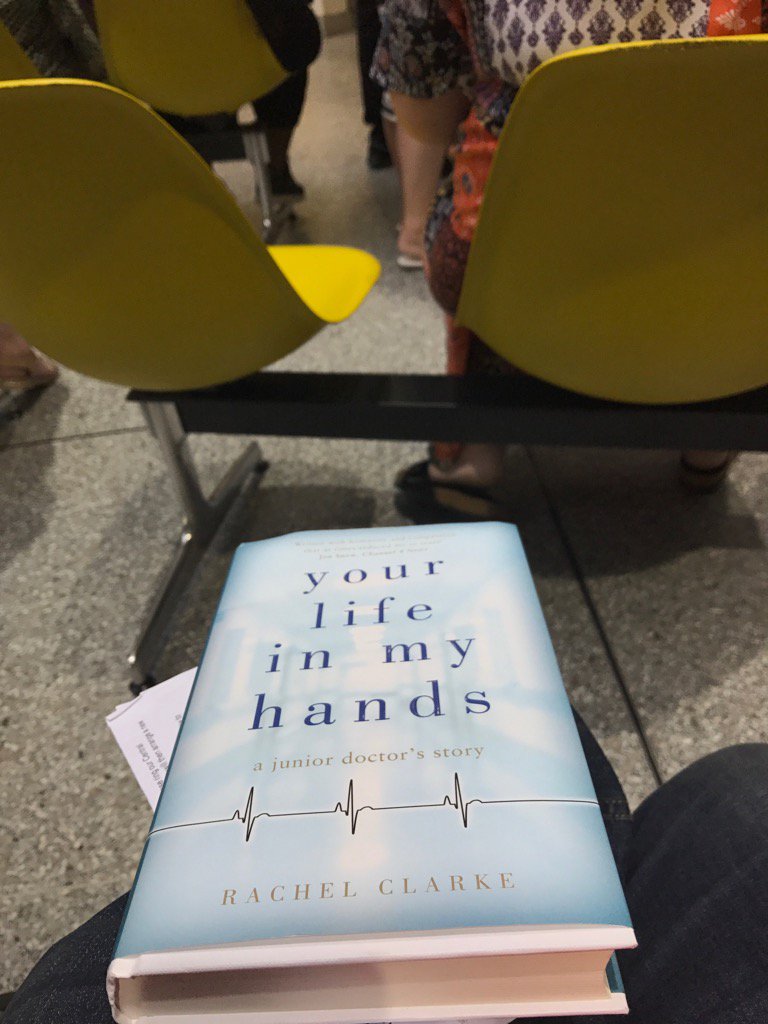 In political circles, there’s an “unwritten rule” that ‘voters don’t do macro’. In other words, voters tend not to get concerned about the actual numerical level of GDP or national minimum wage, but whether policies affecting the country affect them personally.

Rachel Clarke’s “Your life in my hands” has 14 chapters, each with a one word title, such as “Haemorrhage” or “Haemostasis”. You realise quite quickly on in this book that the author’s account of being a junior doctor is deeply personal, as well as acknowledging the larger narrative elsewhere. Each chapter has a memorable individual and an equally useful narrative on the wider context.

The commitment to being a junior doctor shown by the author is extraordinary. Here is someone who had a glittering career in journalism ahead of her, but who choose to fit in science A levels in her spare time to make her eligible to do a second degree in medicine.

The author can spot all the devices of journalistic spin a mile off – so one can only imagine her intense disappointment about the junior doctors’ strike being reduced to an industrial pay dispute, being seen to be protracted by an overzealous BMA, and potentially doing harm to patients whom Rachel Clarke clearly loves.

I normally, being annoying, like to read everything very carefully, including the epilogue. And here the epilogue is deeply poignant. It speaks of a personal influence on the author. Sometimes the criticism is that being a junior doctor is simply like doing any other ‘job’, but Rachel Clarke’s personal familial influences on medical professionalism are deeply raw, very insightful and quite often surprising. And the descriptions of very vivid ‘brushes with death’ are incredible.

My late father was a much-loved single-handed GP of about 30 years’ standing, and I remember him getting up at 3 am to drive to a patient’s house, when I was a very young boy, even now.

The time when Rachel Clarke’s young boy, acting the part of a paediatric surrogate patient, points out to some hapless medical students, ‘it’s called a stethoscope’ is brilliant.

Even though the characters referred to in the book are anonymised, I recognised most of them. The descriptions are amazingly fine-grained. If you’re a stickler for detail, the character portraits are brilliant. In my case, the heroin addicts were brilliant at shooting up themselves.

The notorious fear of cannulaes and cockroaches would make any junior doctor proud. The accounts of friendships made, as well as experiences such as exact contemporaries saying, “Please could you have a look at this? I’m not really sure”, are brilliantly described.

Also, the sheer detachment of the junior doctor workforce from the managers is captured exactly by the promotion of Zumba classes at inappropriate times.

The clinical vignettes are accurate and interesting, such as the need to cannulate with very large venflons someone about to engulf herself in a gastrointestinal bleed, or the peaked T waves on the ECG of someone with a dangerously high serum potassium.

In my case, one of my latest memories whilst a junior physician at the National Hospital for Neurology and Neurology was the junior doctor in the adjacent cubicle screaming, “Just relax”.

This always signalled to me someone to me nervous about his examination technique rather than a genuine appreciation of gegenhalten and other similar phenomena.

As someone caught up in the GMC ‘class of 2006’, I have always found the concept of ‘resilience’ somewhat baffling. Rachel Clarke’s analysis of whether junior doctor training can really be likened to training in the army is both sophisticated and fascinating, as doctors invariably do not see themselves ‘in battle’ with their patients.

The word ‘resilience’, rather, I find inappropriate as it implies some regulatory frailty which is the fault of the junior doctor. Rather, in the case of a junior doctor with mental health problems, it is a feature of an extended ecosystem of lack of supportive seniors, often in a truly toxic culture, a lack of appointment of a GMC health supervisor, or a protracted regulatory regimen designed primarily to humiliate publicly its respondents, with no discernible endpoint.

The book clearly makes out how the professionalism of being a doctor completely defeats everything else. The joy of ‘take a look at this!’ for a medical student, in reference to situs inversus/dextrocardia, or a bulging palpable abdominal aorta aneursym, is wonderfully conveyed in the author’s description. None of this is, of course, captured by ‘productivity’, ‘efficiency’, or ‘innovation’ metrics.

I must admit that many of the recent episodes were immediately familiar to me, such as when Rachel and Dagan found themselves sitting at a fold-up table outside Richmond House, or that time messages from a secret group in the BMA found themselves in the public media.

The examples of the hashtags made me laugh, how the Secretary of State was unable to control all of the narrative. Nonetheless, the frustration of how the core problem of understaffing in hospital medicine had been exacerbated by deliberate cuts leading to threats in patient safety was clearly palpable like the most dilated vein Rachel Clarke has ever had to cannulate at 4 am.

And I do agree with a Twitter follower. When I come to re-read this astonishing book, I will want to do so on my iPad.

← Experiences from a recovering doctor. Why I wish to return to doing clinical work Courage and leadership in healthcare: a critical analysis →
Click to listen highlighted text! Powered By GSpeech