By shibleyrahman in Dementia on December 21, 2014.

This year, the Alzheimer’s Disease International under Marc Wortmann has done outstanding work.

Its output is phenomenal (see for example this latest paper). I have no doubt whatsoever ADI will continue to flourish under Glenn Rees, the incoming Chair (currently Chair Elect).

People who are very close to me will be there.

It is, also, a lovely city. 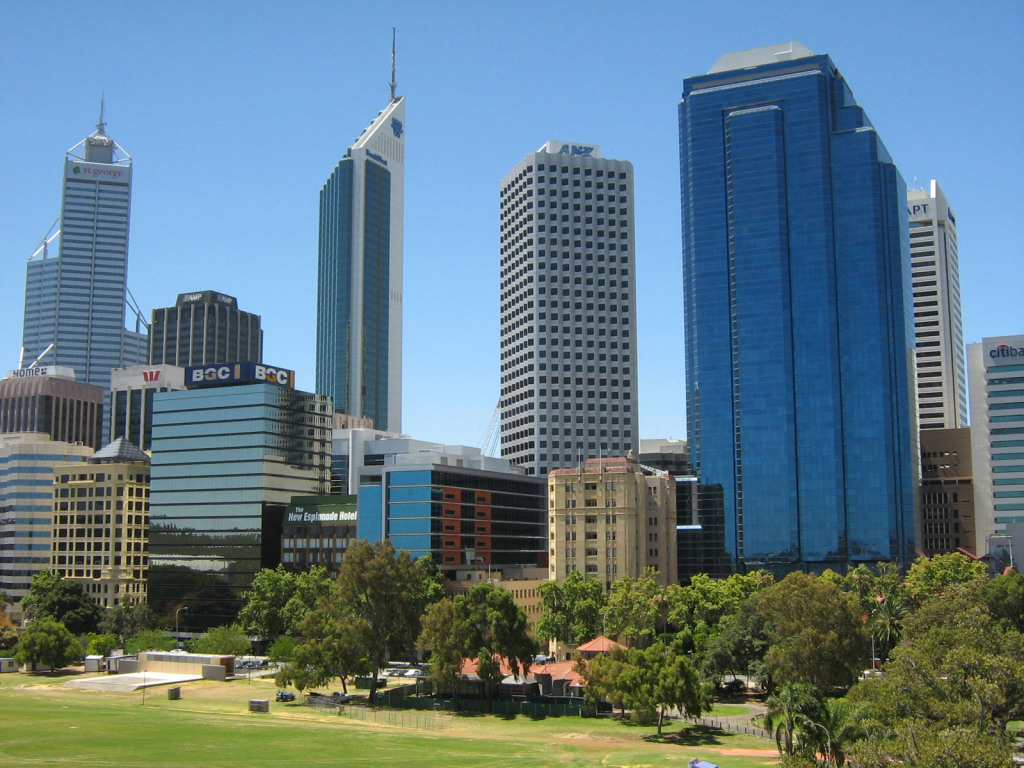 It was always emphasised that this conference would showcase the lived experiences of people with dementia. People living with dementia and caregivers were indeed encouraged to attend. 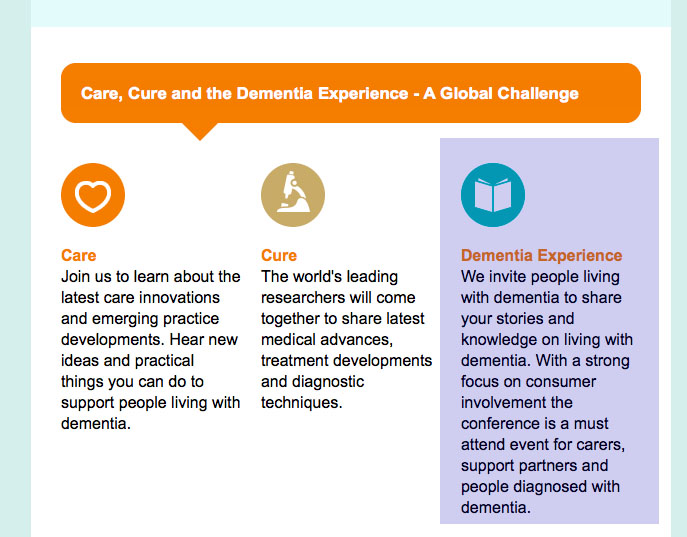 This is a part of the list of posters to be presented on Thursday 16 April 2014.

The two submitted by Chris Roberts and Truthful Kindness are shaded in a dark red.

The titles most clearly say ‘lived experience’ in the titles.

They were submitted as oral presentations, as the two people involved did not want them as poster presentations.

Indeed they did not opt for the ‘poster/oral’ option specifically for that reason.

Truthful Kindness’ affiliation is Dementia Alliance International, Iowa; it was never submitted as United Kingdom. The irony about Truthful’s intended oral presentation is that she wished to explain how people with dementia can use all sorts of media to express themselves artistically and creatively. Arts and creativity is a huge policy plank in living well with dementia internationally.

It would have been clear to any diligent reviewer of these abstracts, from their submitted biographies, that both Chris and Truthful were genuinely living well with dementia.

Here’s Chris even holding the flyer of the Dementia Alliance International group, at Glasgow earlier this year in the Alzheimer’s Europe conference on dignity and autonomy in dementia. 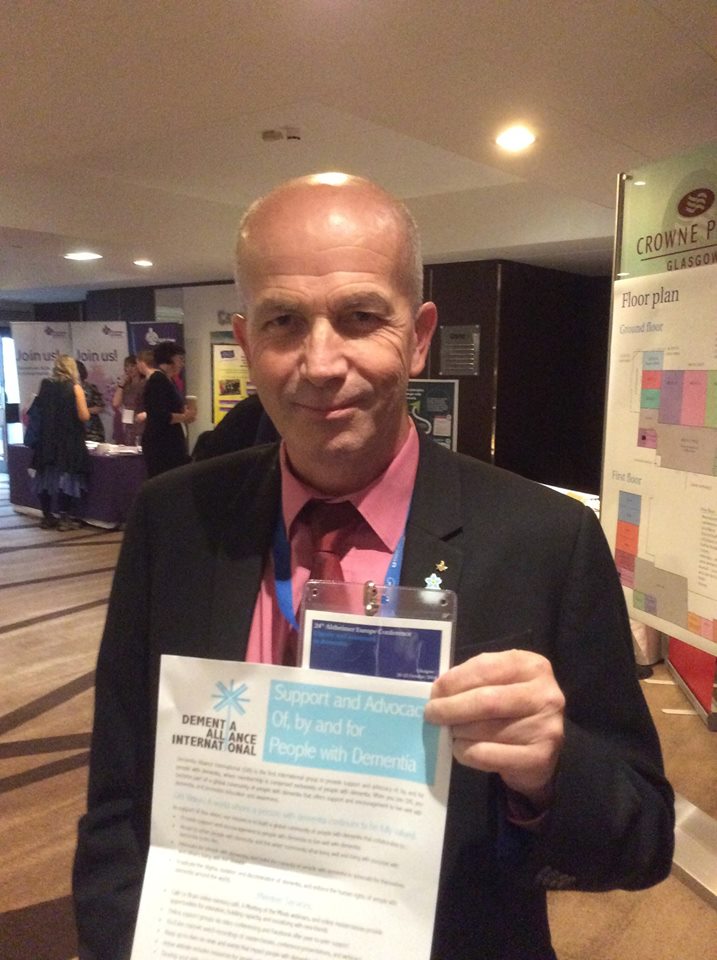 Chris is currently a Board member of the Dementia Alliance International.

I understand, from having spoken to one of the juniors at the Alzheimer’s Disease International, that there may even be a chance for poster presenters to give short oral presentations of their work. But I think this possibly may be worse.

It has been explained to me that the environment for the poster sessions is very off putting. It is a crowded room, with not much space for the poster itself. It is a very noisy environment, which is very distracting. In other words, this can be an environment which is potentially disadvantageous to people with early dementia who wish to present.

I am, of course, pleased that the keynote speakers for this conference include two friends of mine, and whom I admire massively, and who are living well with dementia, Kate Swaffer and Helga Rohra.

As is known, I consider Kate to be exceptional in every way.

These are two symposia from the scientific programme in which they might have appeared: “younger onset dementia” and “engaging people living with dementia”. From eyeballing the titles of these talks, I don’t see many speakers talking about their own personal lived experiences. 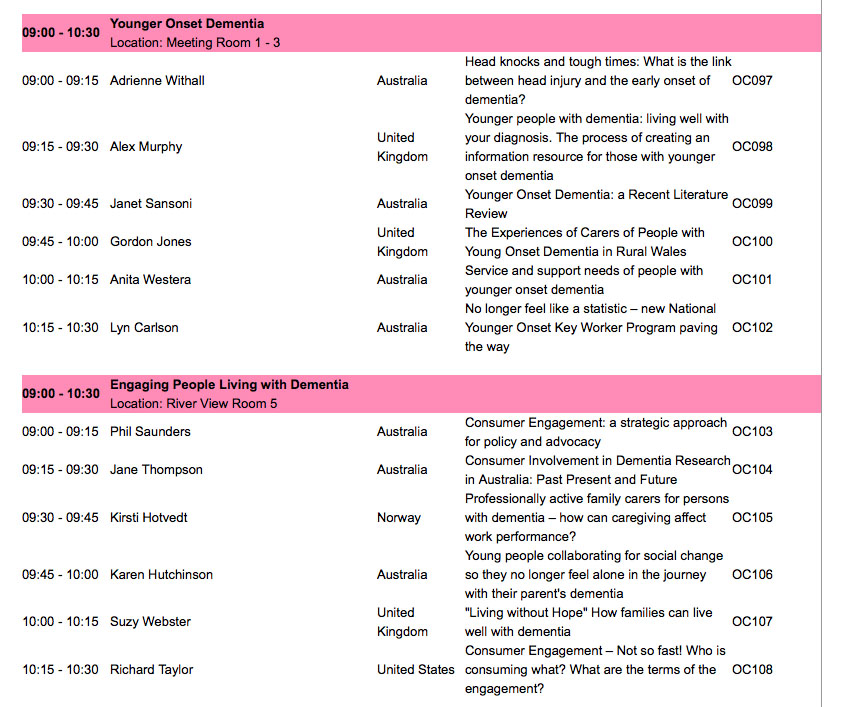 The only parts of the conference yet to be revealed are the ‘workshops’.

The details of the workshops are given as follows:

I am extremely honoured to be on the international advisory board for the 2015 conference. I should therefore not want to criticise the organising committees in any way for their hard work.

But I cannot be a silent bystander to this either. The whole point about viewing dementia as a cognitive or behavioural disability secondary to a brain disease is that it then comes under international and domestic laws (for example, for UN Convention for people with disabilities and the Equality Act).

Ignoring two people’s wishes to have an oral presentation, as they cannot do poster presentations, is not making reasonable adjustments for their disability, one could easily argue.

I think the Alzheimer’s Disease International conference 2015 will turn out to be a brilliant opportunity for us to meet up; and we will also get a chance to discuss ‘cure’, ‘care’ and ‘living well’.

But Richard Taylor, living himself with a dementia, is right in his presentation from last year – where is the representation of evidence of psychosocial techniques?

I’d like to ask where is the evidence looking at ‘living well’, such as GPS trackers, design of wards, design of houses, the wider built environment, incontinence, eating well, assistive technology, ambient assisted living, advocacy, and so on?

On that note, I do strongly applaud the work of ‘Dementia Alliance International‘, which is truly representing the community of people living with dementia.

We hear words such as ‘challenge’ being used all the time in relation to dementia.

Hopefully the organisers will rise to the ‘challenge’ of living up to the reasonable expectations of those people with lived experiences wanting to take part fully in the ADI conference 2015 in a format they feel most comfortable with (and which makes reasonable adjustments if required).