Home » Book » An overview of my book ‘Living better with dementia: champions for enhanced communities”.

An overview of my book ‘Living better with dementia: champions for enhanced communities”.

I hope you find this overview of my book ‘Living better with dementia: champions for enhanced communities’ useful.

It is written by me.

It will primarily assess where we’ve got to, along with other countries, in improving diagnosis and post-diagnostic care, and assess realistically the work still yet to be done.

My thesis will articulate why the ‘reboot’ of the global “dementia friendly communities” must now take account of various issues to be meaningful. It will argue for a difference in emphasis from competitive ‘nudge’ towards universal legal and enforceable human rights promoting dignity and autonomy.

It will also argue that dementia friendly communities are meaningless unless there is a shift in the use of language away from ‘sufferers’ and ‘victims’, while paying tribute to the successful “Dementia Friends” initiative.

It will, further, argue that dementia friendly communities are best served by a large scale service transformation to ‘whole person care’, and provide the rationale for this. A critical factor for enhancing the quality of life of people living better with dementia will be to tackle meaningfully the social determinants of health, such as housing and education.

The thesis will also argue that dementia friendly communities must also value the behaviours, skills and knowledge of caregivers in wider support networks. This is essential for the development of a proactive service, with clinical specialist nursing input deservedly valued, especially given the enormous co-morbidity of dementia.

This title will be published by Jessica Kingsley Publishers, in early 2015.

Chapter 1 provided an introduction to current policy in England, including a review of the need for a ‘timely diagnosis’ as well as a right to timely post-diagnostic care. This chapter also provided an overview of the current evidence base of the hugely popular “Dementia Friends” campaign run by the Alzheimer’s Society and Public Health England, to raise awareness about five key ‘facts’ about dementia. It was intended that this campaign should help to mitigate against stigma and discrimination that can be experienced by people living with dementia and their caregivers.

Chapter 3 looked at the various issues facing the timely diagnosis and post-diagnostic support of people living with dementia from diverse cultural backgrounds, including people from black, Asian and ethnic minority backgrounds, people who are lesbian, bisexual, gay or transsexual, and people with prior learning difficulties.

Chapter 4 looked at the issue of how different jurisdictions around the world have formulated their national dementia strategies. Examples discussed of countries and continents were Africa, Australia, China, Europe, India, Japan, New Zealand, Puerto Rico and Scotland.

Chapter 5 looked at the intense care vs care debate which has now surfaced in young onset dementia, with a potentially problematic schism between resources being allocated into drugs for today and resources being used to fund adequately contemporary care to promote people living better with dementia. An example was discussed of how the policy of ‘Big Data’ had gathered momentum across a number of jurisdictions, offering personalised medicine as a further potential compontent of person-centred care. This chapter also considered the impact of the diagnosis of younger onset dementia on the partner of the person with dementia as well. A candid description was also given about the possible sequelae of the diagnosis of young onset dementia on employment, caregivers, and in social isolation.

Chapter 6 focused on delirium, or the acute confusional state, and dementia. It considered the NICE guidelines for delirium, and the pitfalls in considering the relationship between delirium and dementia in English policy.

Chapter 7 was the largest chapter in this book, and took as its theme care and support networks. An overview of how patient-centred care is different from person-centred care was given, and how person-centred care differs from relationship-centred care. The literature inevitably has thus far focused on the ‘dyadic relationship’ between the person with dementia and caregiver, but a need to enlarge this to a professional in a ‘triangle of care’ and extended social networks was further elaborated and emphasised. Finally, the importance of clinical specialist nurses in ‘dementia friendly communities’ was argued, as well as the Dementia Action Alliance’s “Carers Call to Action”. Different care settings were described, including care homes, hospitals – including acute hospital care, and intermediate care.

Chapter 8 considered eating for living well with dementia. This chapter considered enforceable standards in care homes, including protection against malnutrition or undernutrition. The main focus of the chapter was how people with dementia might present with alternations in their eating behaviour, and how the mealtime environment must be a vital consideration for living better with dementia.

Chapter 9 looked at a particular comorbidity, incontinence. The emphasis was on conservative approaches for living well with dementia and incontinence. Other issues considered were the impact of incontinence on personhood per se, and the possible impact on the move towards an institutional home.

Chapter 10 argued how the needs for people living better with dementia would be best served by a fully integrated health and social care service. This chapter provided the rationale behind this policy instrument in England.  The chapter also considered various aspects of what would be likely to make ‘whole person care’ work, including data sharing, collaborative leadership, care-coordinators, responsible and accountable ‘self care’, and the multi-disciplinary team. This chapter also considered how it was impossible to divorce physical health from mental health and social care, and explained the intention of the longstanding drive towards ‘parity of esteem’ in English policy.

Chapter 12 considered whether ‘wandering’ is the most appropriate term. The main emphasis of this chapter were the legal and ethical considerations in the use of ‘global positioning systems’ in enhancing the quality of life of persons with dementia and their closest ones.

Chapter 13 considered a number of important contemporary issues, with a main emphasis on human rights and “rights based approaches”. While there is no universal right to a budget, the implementation of personal budgets was discussed. The chapter progressed to consider a number of legal issues which are arising, including genetic discrimination in the US jurisdiction, dementia as a disability under the equality legislation in England, and the importance of rights-based approaches for autonomy and dignity. Finally, the issue of engagement was considered.

Chapter 15 looked at the triggering of football sporting memories in people living well with dementia. This chapter considered the cognitive neuroscience of the phenomenon of this triggering, and presented a synthesis of how the phenomenon could be best explained through understanding the role of emotional memory in memory retrieval, how autobiographical memories are represented in the human brain usually, the special relevance of faces or even smells such as “Bovril”.

Chapter 16 looked at the impact of various innovations in English dementia policy, giving as examples including service provision (such as the policy on reducing inappropriate use of antipsychotics or the policy in timely diagnosis) and research. This chapter also contemplated the principal factors affecting how innovations can become known, and what ultimately determines their success.

Chapter 17 looked at how leadership could be promoted by people living with dementia. This chapter considered who might lead the change, where and when, and why this change might be necessary to ‘recalibrate’ the current global debate about dementia. This chapter considered how change might be brought about from the edge, how silos might be avoided, the issue of ‘tempered radicals’ in the context of transformative change to wellbeing as an outcome; and finally how ‘Dementia Champions’ are vital for this change to be effected.

Please note that Beth is not endorsing this book – this image is entirely separate and is taken from the main event for G8 dementia – we’re all proud of Beth’s work meanwhile! 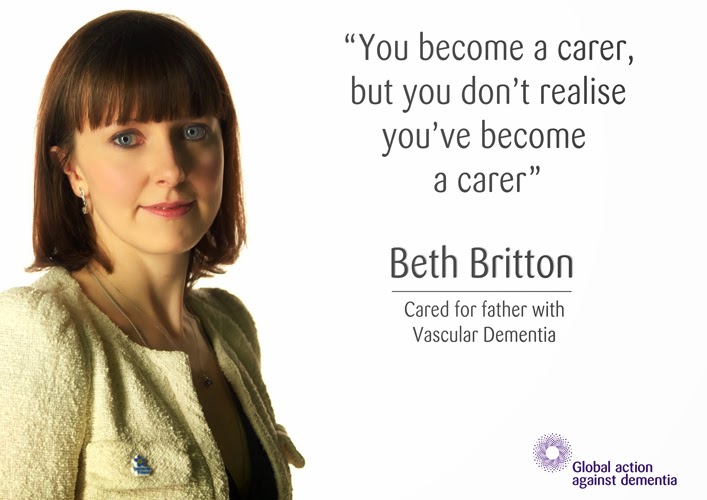 ← The general election isn’t a referendum about a bacon butty. It’s a referendum on the NHS. The final conclusion to my book on living better with dementia →
Click to listen highlighted text! Powered By GSpeech