Home » Politics » Why has Owen Smith MP lost all momentum in his leadership campaign?

Why has Owen Smith MP lost all momentum in his leadership campaign?

By shibleyrahman in Politics on August 6, 2016. 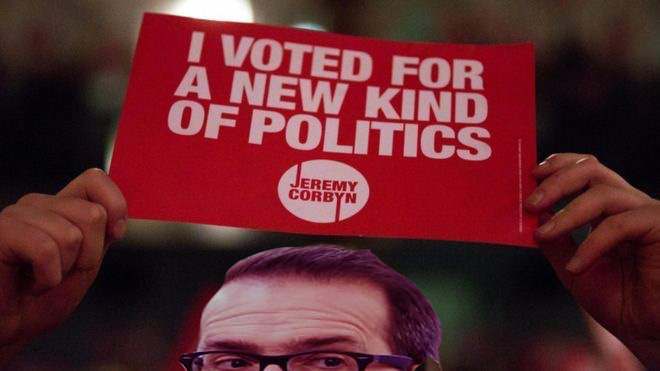 It’s totally clear to me now having spoken to several MPs who had not voted for Jeremy Corbyn originally, who then said, “Believe me we wanted to make it work!”, those MPs had no intention of ‘making it work’ whatsoever. They invariably incite the most petty and vindictive examples of where it is ‘impossible’ to work with Corbyn’s office, such as not picking up the phone over lunchtime. We got a whiff of this over the entirely over the top way Seema Malhotra reacted to somebody from estates using a keycard to inspect an office one would customarily have vacated weeks before on resignation. We also got a whiff of this with the way Wes Streeting attacked Shami Chakrabarti for become a member of the House of Lords, together with full innuendo of the ‘apparent bias’ without explaining the full test given by the Porter v Magill case (i.e. how it would look to a reasonable observer KNOWING ALL THE FACTS.)

The smear was even more excruciating to watch on BBC News 24 as it implied that somebody of Chakrabarti’s standing in the legal profession (wiki education and training here) would not have been aware of what the ‘apparent bias’ test isbut somebody with minimal legal training like Wes Streeting would (wiki education and training here). Instead of focusing on why heads of publicity in David Cameron’s office had received high honours for doing their job, including stylist work for SamCam, Streeting went on a tirade against a lawyer held in extremely high esteem for her impartiality, professionalism and legalistic advocacy. The proper arena for these smears for Streeting is the Bar Standards Board, if he really feels there is a case to answer.

If there is a genuine complaint over the independence and impartiality of the work done by Chakrabarti, it has to be done through the correct channels not by smear on TV news (which is exactly the same means of communication used to discredit Corbyn.) The most relevant clause in the current code of conduct for barristers from their code of conduct is 301.

Overall, it’s dreadfully easy to pick up a picture of the sheer degree of nonsense with which John McDonnell MP and Jeremy Corbyn MP have had to deal with. These #Labour171 are not professional MPs, but the majority of Labour MPs are nasty, vindictive idiots who need the publicity of TV studios to make their vacuous post corporate life publicity work.

But this TV interview from the HardTalk series with Lord Mandelson from 3 November 2015 is very revealing. Bear in mind that the leadership election result had only been disclosed publicly on Saturday 12 September 2015.

And the disarray of Mandelson’s answers explain fully why Owen Smith MP’s campaign is in utter disarray, even if you discount complete own goals like standing up for female lib while claiming simultaneously, albeit in a half-jokey way (according to him), to “‘smash’ Theresa May back on her heels”. Owen Smith MP came later to defend the need for promoting gender equality within Labour, having deprived the only female candidate in the leadership contest from going in competition with Jeremy Corbyn MP.

You see, I can’t find anyone at all – and I’ve searched pretty comprehensively – any Owen Smith MP supporter who can explain at all how Owen and Jeremy materially and substantially diverge on policy. Apart from Trident, which could be offered as a legitimate answer (but bear in mind Corbyn got a huge applause for arguing that Trident was not the most appropriate defence spend given current problems), there are no massive policy differences. Jeremy Corbyn MP has maintained that he is a reluctant Remainer in the European Union, seeing a strong case for certain legislative protection from EU laws including human rights and a good working relationship with people in Europe. Corbyn managed to get about 10% more of his party members to vote Remain than Cameron – Corbyn did more media appearances rallying for remain than the rest of the shadow cabinet put together.  But it is worth noting that there is a substantial number of members of the party, who completely unlike the parliamentary party, wanted ‘out’ on Europe, and like Frank Field MP think a second #Brexit vote would serve no utility. I lost count of the number of times Owen said, “I agree with Jeremy“, in the hustings from Cardiff.

In the HardTalk interview, Lord Mandelson trots a complete argument for why the current leadership bid by Owen Smith is a complete nonsense, and a waste of everybody’s time, when Labour MPs could and should have been concentrating on the Conservatives. Mandelson talks about “my party”, when in fact it is “our party”, and then describes Jeremy Corbyn as “far left” when his policies, which apply to a world of 2016 not 1983, on getting rid of PFI, tackling the lack of social housing, tackling aggressive tax avoidance, stopping rampant privatisation of the NHS, producing a national investment bank to build up infrastructure in harmony with many European countries, re-nationalising the rail industry, are policies which are hard to disagree with. These are in fact policies which successors to New Labour could have produced themselves between 2010-2016 if they were so desperate to produce their own successor. Even Blairites concede that they need to win in the world of 2016 not 1997 now. Mandelson says critically of the Blairites “but in fairness to Corbyn, the modernisers had failed to modernise themselves.”

So Mandelson refers to poor poll ratings of Jeremy Corbyn MP – but without any reference to the general unreliability of polls (take for example their uselessness in the EU referendum or the 2015 general election). Or, for that matter, he does not refer to the pretty dreadful poll ratings of Gordon Brown or Ed Miliband. Mandelson views Jeremy Corbyn’s leadership chances entirely through the prism of a ‘beauty contest’, when it is clear that Mandelson is ‘no oil painting’ himself. Mandelson trots out the need for electability, the Hilary Benn ‘winning’ argument, when Labour were annihilated in Scotland in 2015 (down from 41 MPs to 1 MP), disasters in 2010 and 2015, and a declining % of the vote for Labour from 2005 roughly onwards. Mandelson appears to resent that “the doors were thrown open to new members”, all of whom were vetted, and did contain many people returning from Labour having been totally pissed off with Labour during the Blair years. Mandelson refers to the other three candidates in the 2015 leadership election as “business as usual”, when that is precisely what Owen Smith MP appears like. Owen Smith MP flip flops from one position to the next, whether it’s on PFI or 100% state ownership, and there is absolutely no consistency in his policies from week to week.

Mandelson said of Corbyn in September 2015:

“Nobody will replace him, though, until he demonstrates to the party his unelectability at the polls. In this sense, the public will decide Labour’s future and it would be wrong to try and force this issue from within before the public have moved to a clear verdict.”

Mandelson then describes Corbyn as “not the election winning person he presents himself as he pretends to be” – but there’s the rub. Corbyn critics were desperate for Corbyn to put a foot wrong, but this opportunity did not present itself in the Labour or Bristol mayoralty elections or in 4 by-elections (which Labour all won including increasing its share of the vote in three). Mandelson continues “we have to be ready..with serious new fresh policy ideas to win support from in the party and then in the country“. But there has been no alternative vision from Corbyn critics – if they really want to be ‘electable’, is it, for example, their plan not to do something about the rip-off PFI, just ignore aggressive tax avoidance, think the debacle in Southern Rail is ok, do nothing about rip off energy bills, do nothing about the disaster in social housing, or to promote yet further privatisation of NHS and social care? Would that do it for Mandelson and his ideological-terrorist sympathisers?

Without a hint of irony, Mandelson continues:

“We’re not going to win this time with brilliant public relations. We need a renewal of policies”.

“We need to organise not only in our grassroots but also in communities where we want to win”.

So – let’s get this straight – Corbyn has done what he’s been done, i.e. produced a ‘national debate’, and mobilised new supporters and members of Labour, and he’s being criticised for this?

Mandelson then goes onto sneer at “quantitative easing”, in the context of a wacko Corbynomics policy, when the Bank of England announced a further boost of quantitative easing only this week as described in the Guardian:

“Plans to pump an additional £60bn in electronic cash into the economy to buy government bonds, extending the existing quantitative easing (QE) programme to £435bn in total”

Mandelson admits, “we ceased to be exciting”.

I think it’s worse than that – despite early successes such as the Human Rights Act and the national minimum wage – and especially after Chilcot – New Labour has become a very toxic brand, so much so Ed Miliband MP couldn’t wait to wash his hands clean of it (whilst signing up to ‘austerity lite’ and having few exciting visionary policies of himself.)

And months and months of a time period where Mandelson and colleagues could’ve planned for ‘their moment’, it is quite incredible that no credible candidates have been stumped up at this point in time. It could be that good candidates like Lisa Nandy MP or Sir Keir Starmer MP, if we believe the Labour PLP at face value, would rather Labour MPs to succumb to their fate as per the Battle of the Somme, rather than put themselves forward and genuinely ‘save Labour’. Mandelson continues with the meme, ‘we have to decide as to whether we want to be a party of government rather than a party of protest‘, when it is perfectly clear Mandelson and his merry band of ideological-terrrorist sympathisers are getting off on the high of being a Blairite party of protest within the Labour Party.

So Owen Smith MP is likely to lose – badly.

A pity really – despite being a Pfizer ex-lobbyist etc. I think he’s quite a fun and pleasant person. But there were always two stalking horses in this particular contest.

And will the Labour MPs then unify under Corbyn?