Whisper it softly. Keir Starmer is especially crap at politics.

By shibleyrahman in Politics on September 25, 2021. 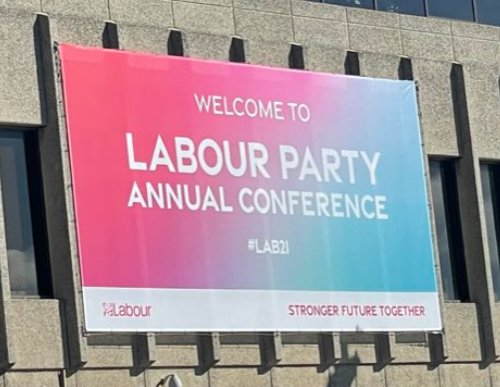 At a time when Labour has voted in a new General Secretary in David Evans, the news is of sacking staff, threatening compulsory redundancies, losing revenue, and a full frontal attack on members. Evans was hardly voted in with a supermajority. Sadly, the vote was not advisory, even if it was at the level of 59/41, almost exactly the 60-40 split estimated.

To revisit an era, things can only can get better.

It’s on days like this that Dame Margaret Beckett had wished that she’d stayed in her caravan.

Labour has had a disastrous start to its latest conference.

The best that the political commentators could say to Keir Starmer’s handling of the launch of the Labour conference was that ‘it is good for Labour to be seen fighting the Unions’.

At the launch of the Labour conference in Brighton, the day normally begins with something motivational for the membership. Not this time.

This time, we are told that, for the Labour leadership, the proposals are to raise the threshold of mp nominations, get rid of the “registered supporters”, and a commitment to review rules inc how to restore vote for unions’ political levy payers.

As far as the membership is concerned, Starmer has spent the last two years brown nosing the Johnson government, having given up even on the slightest of ‘constructive criticism’. Nobody can see the point of what is possibly the worst Labour opposition in my lifetime certainly.

Emma Radacanu, having won the US Open, has just said goodbye to her coach. Starmer, on the brink of the worst Labour disaster in history, even with the media this time supporting him to the hilt, is about to make all the offenders Knights of the realm or CBEs in his mission to promote failing upwards.

Starmer had a golden opportunity at the start of conference to make his mark over the energy crisis, inflation hike, driver shortage exacerbated by Brexit, dumping the triple lock, UC cut, NI hike, or public sector pay freeze.

As far as the over-spotted Red Wall voter is concerned, Labour is fronted by a Remainer who hated Jeremy Corbyn so much he was more than happy to be in his Cabinet. This particular Remainer, as it happens, can’t wait to get his teeth into the necks of anyone vaguely socialist in the Labour Party.

Let’s face it – not even an interview between Wes Streeting and Gloria Di Piero on GB News can stop the rot now.

The Conservative, Unionist and UKIP Party don’t especially to seem have any ideological direction to their roadmap, apart from an addiction to authoritarianism and the “market” which has consistently failed in the NHS, gas, education, and, you name it. All it cares about is media management of the latest crisis. Even Liz Truss MP is tipped for the top now.

Labour should be a hot bed of democratic socialism. It is instead a hotbed of undemocratic croneyism. A relatively popular contribution could be Labour’s proposed Fair Pay Agreements would give working people a pay rise and boost our economy. Labour would bring together representatives from workers and employers to agree minimum pay and conditions in their industry. A radical look at workers vs employees, and a revision of workers’ rights in a gig economy, to revise the Employment Rights Act (1998), would be a good contribution.

Instead, whilst the Labour rulebook states that conference should have a formal vote (show of hands) on the NEC report. Dame Margaret Beckett is not one for following rules to hold the vote. There’s no need to rig a vote any more. Just don’t hold it.

Of course, the HGV and tanker driver crisis is nothing to do with Brexit, and all to do with those pesky unions in Swansea at the DVLA, or refusal to do medical checks from lazy GPs. This is a weird dystopian Universe where Starmer has been taken hostage by a weird sect in the Labour Party determined to make Labour look out of touch and irrelevant.