Home » Politics » The Court of Appeal judgment was profoundly illiberal, and the issues need scrutiny notwithstanding

The Court of Appeal judgment was profoundly illiberal, and the issues need scrutiny notwithstanding

Whatever cognitive and emotional biases were at play, true or apparent, materially significant or otherwise, let’s assume that there was no untoward process in the decision-making of the three Court of Appeal judges last week.

It is quite incredible that they were able to deliver such a detailed judgment within the space of 24 hours, some might say, but this is probably not surprising given the voluminous nature of the background documentation such as Iain McNicol’s witness statement (if he submitted one.)

Whatever is the real story behind the ‘entryist Trots’, there is absolute no proof that the vast majority wanted to vote for Jeremy Corbyn. For all we know, the #SavingLabour campaign has been a roaring success (so much so it is about to be succeeded by ‘Labour tomorrow’). Also, we can of course safely assume that 130,000 people were so disgusted by Jeremy Corbyn MP’s lack of leadership on the #EURef that they wished to sign up to Labour to give rid of him asap. Not.

The alarms about ‘entryist Trots’ are a matter of conjecture and speculation, so much so no realistic legal judgment would go into great lengths about the need to ban new members from voting. But the Court of Appeal delivered a voluminous judgment which made no reference to how the electronic contract on the website might have been concluded.

The judgment gets into an acceptable review of the jurisprudence on the completeness of a contract, on whether some terms are more important than others. This is to deny that there are certain issues which happen outside of the explicit terms of a contract – i.e. the right of the employee to resign for downright offensive behaviour by his employer, an implied term in the employment contract.

But amazingly the jurisprudence employed by the Court of Appeal makes no reference at all to how the wider way in which people are attracted to the website and might conclude their membership.

There is for example this notice, and note the wording. 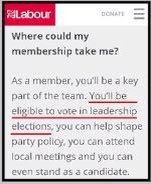 Let’s assume that joining Labour is exactly like making a contract, at best a spurious assumption, but one which has been supported by reference to cases such as Choudhury and Ors v Treisman. The Court of Appeal judges appear to have somewhat lost sight of why the claimants were there at all – they thought that through membership they could exercise a vote.

If the freeze date were of such crucial importance, it should have been given such prominence as you’d expect for revocation of an offer for a contract (i.e. same size and letter etc.) – but the fundamental principle of contract law will still hold – caveat emptor. But this for a reasonable buyer to do a reasonable due diligence – cf buying a lettuce on the Sainsburys on-line grocery website. I don’t think it’s possible for a reasonable buyer in this context to be able to inspect every nook and cranny of the Labour rule book nor the surrounding national legislation on elections and referendums.

Justice might for one or four claimants might not matter as such, but if you truly believe in the rule of law, you’ll hold that everyone is equal in front of the law. But it is clearly a matter of natural justice that the Labour NEC can’t take the monies off 130,000 at what at best can be best called dubious circumstances. Likewise, it was clearly not natural justice for some in the NEC to deny the wish for Jeremy Corbyn MP to defend his own position as leader. It is well known that many people on the elections committee of NEC are extremely hostile, sometimes to his face or in written form, to Jeremy Corbyn.

The Court of Appeal judgment was profoundly illiberal. The English law for the time being complies with the European doctrine of proportionality, in that its rules are deemed necessary and proportionate by the legislature. Whatever the views about the setting of the ‘freeze date’, including ‘it’s always been done that way’, the fashion of setting a freeze date retroactively when members of Labour had been so vehemently encouraged to sign up is an extemely dangerous one. As an example, the English law is extremely reluctant to produce retroactive law, but it has been known to happen, for example the War Damages Act. This decision unfortunately does give an impression in that the NEC is indeed above the common law – in that its rule book can make up rules at the drop of the hat for any spurious reason. This autonomy is vehemently not called irrational by the Court of Appeal. Methinks the lady protesteth too much?

But on the face value, 130,000 people have concluded a contract, their monies debited, and now they are denied a chance of a vote in a democratic process – and they want their money back. It is a long running thread in English law that the law looks at the substance not the form, which is why it is baffling why the Court of Appeal seem to have completely lost sight of why the claimants felt so strongly enough to make a claim at all.

The Supreme Court will certainly need to have a careful look at how it could have been the Court of Appeal lost its way so triumphantly, with consideration of the formation of the contract in this digital age (e-commerce, for example) and the human rights involved in a democratic right to vote. LJ Laws has of course famously mooted whether human rights law should involve itself in issues of society and moral issues, but we are where are. The Rt Hon Prof Robin Jacob who famously sat as one of the experts in intellectual property for the Court of Appeal was very good at joining up different strands, unlike the three CoA judges last week I feel. Jacob before becoming a distinguished lawyer studied natural sciences at Cambridge.

Lord Falconer claims it was a ‘good judgment’ and emphasises that it was not the Labour NEC who brought the claim. But he is being utterly disingenuous as it was the Labour NEC’s decision to use members’ money to appeal the High Court judgment, a decision which even Frank Field MP found utterly bizarre on BBC Any Questions this friday.

The liberal English press seem curiously silent on the muzzling of liberal principles.

“The true and only true basis of representative government is equality of rights. Every man has a right to one vote, and no more in the choice of representatives. The rich have no more right to exclude the poor from the right of voting, or of electing and being elected, than the poor have to exclude the rich; and wherever it is attempted, or proposed, on either side, it is a question of force and not of right. Who is he that would exclude another? That other has a right to exclude him.”

It is a matter of conjecture from Alan Ryan, that JS Mill did not think of contract and property rights as being part of freedom.

The right to vote is fundamental: as stated clearly on the Liberty website,

“The right to free elections is crucial to establishing and maintaining the foundations of an effective and meaningful democracy governed by the rule of law.

By agreeing to Article 3 of the First Protocol, the UK has undertaken to hold free elections at reasonable intervals by secret ballot, under conditions which will ensure the free expression of the opinion of the people in the choice of the legislature.

And the late great Tony Benn repeatedly emphasised how the vote was of much more influence than money.

These five questions seem to me to be particularly pertinent, and worth asking for the Labour #NEC and much of the currently motley crue that is that is the parliamentary Labour Party.

← Nobody is above the law; not even the NEC Owen Smith MP must surely have been aware that the NHS is being rapidly privatised? →
Click to listen highlighted text! Powered By GSpeech