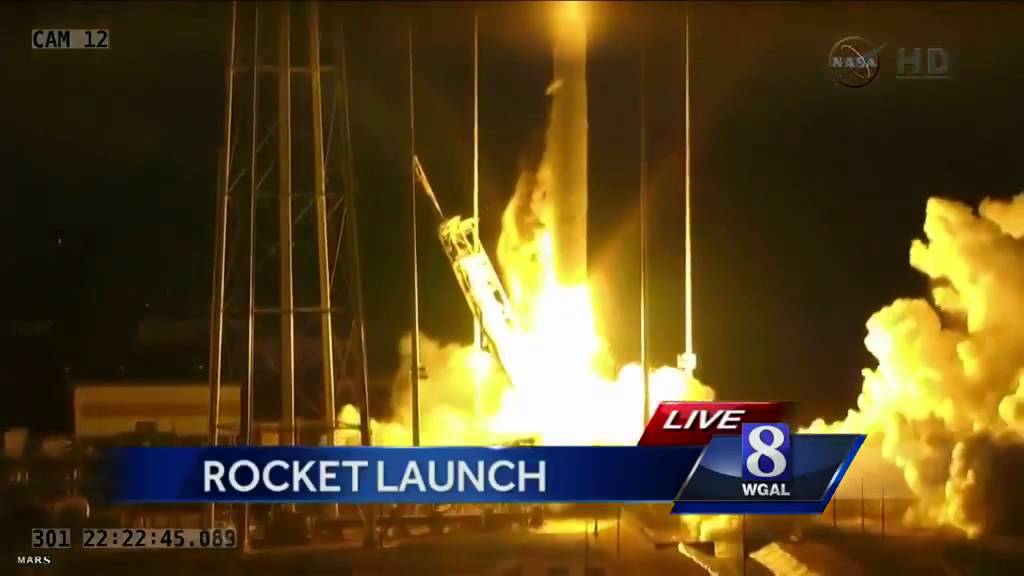 There are possibly few things as traumatic to watch as a rocket blowing up on launch.

I have asked myself the question why I thought Owen Smith MP was ‘quite good’ in the Shadow Cabinet, but intrinsically awful once he emerged as a leadership candidate. This simply smacks of ‘double standards’. I suppose the answer lies in the fact that Owen Smith MP, despite being terribly slick, does not instinctively emerge as an authentic leader. I think it is commendable he had his entire family at his launch in Nantgarw College in Wales, compared to Jeremy Corbyn who did not mention his family at his launch in Salford, but ironically Owen Smith MP appeals to fail on what was meant to be the hallmark of the Angela Eagle MP pitch – i.e. “real leadership”. Smith is a person full of inherent contradictions, which reminds me of advice people are often given to make lies consistent at least. He talks about his contempt for sloganising before going into an explanation of ‘from austerity to prosperity’. He talks about how he ‘was not expecting to be there’ at his launch when in fact others have alleged this bid has been in the pipeline for months. According to Jeremy Corbyn himself at the launch of his attempt to tackle the gender pay gap through audit of employees’ incomes by sex, Corbyn himself explained how Smith had in the office said how happy he was in the Shadow Cabinet, left and then promptly resigned.

If atmospheres on Facebook videos are anything to go by, the ‘atmosphere’ of the launches were completely different. These photos circulating on Twitter both came with the strapline that the leadership contenders were addressing ‘packed crowds’. 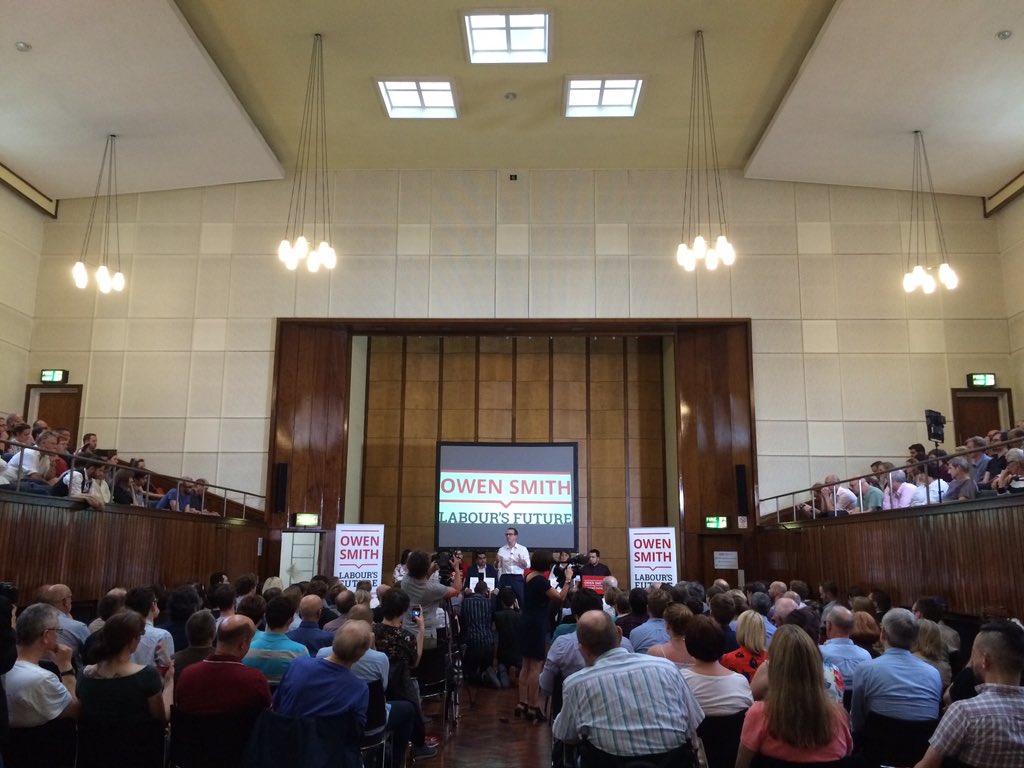 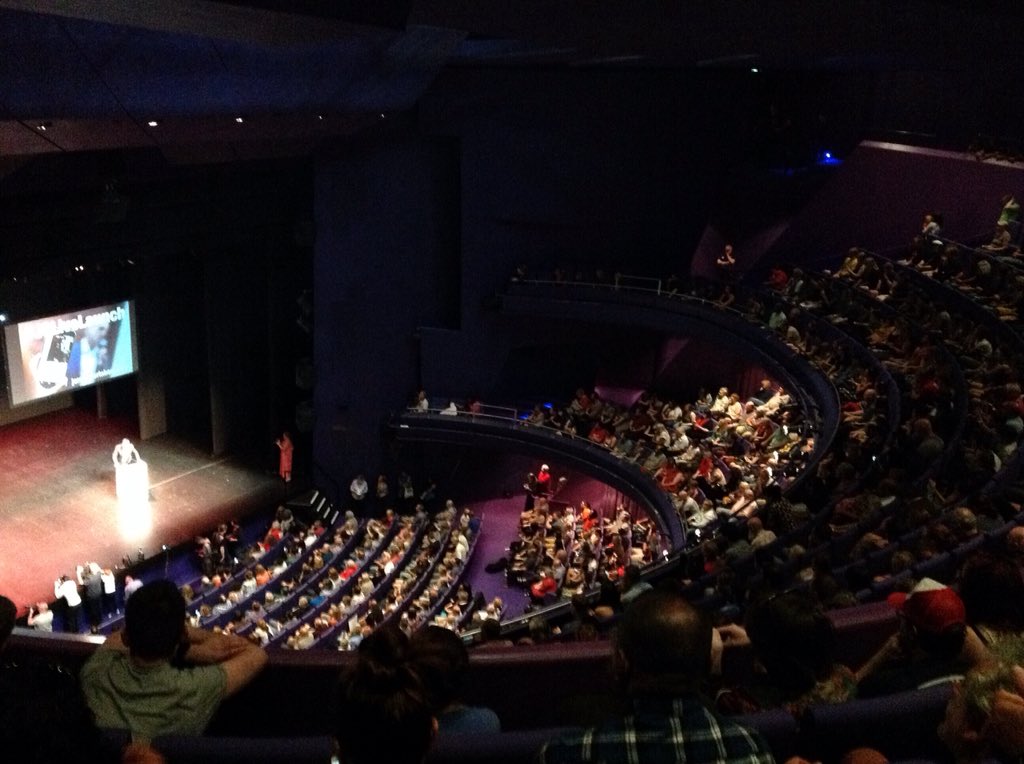 I happen to think that Jeremy Corbyn MP is not the greatest orator ever. As a guide, when referring to people sleeping in cardboard boxes, Corbyn delivered the point in more of the manner of an experienced accountant than a charismatic leader; I am comparing his delivery of the point to that of his friend Tony Benn MP who used to combine the sleeping with cardboard boxes remark with a comment on the failure of ‘market forces’. But this is nothing compared to the delivery of Owen Smith MP. The decision of Smith to flank himself with women MPs such as Harriet Harman MP and Heidi Alexander MP, coupled with the policy that half of the shadow cabinet will be women, arguably elegantly makes Smith’s equality point for him – is Smith advocating equity for females on the basis of merit, or simply arguing for 50% regardless? I don’t expect Smith to have given much time to the equity vs equality point, but it hugely matters to me being a British Bangladeshi guy who is physically disabled. All the usual criticisms of positive discrimination have been well rehearsed elsewhere, so I’m not going to go into this now. But Smith’s positioning on this point jars with my unpleasant experience of Labour Party committees; a lack of representation of people from other ‘protected characteristics’ under the Equality Act (2010), such as disability or sexual orientation.

So parking aside that Smith is white, physically able, male, young, and heterosexual for a moment, to all intents and purposes by his own admission, “normal”, the Smith pitch is confusing at best. Whilst it crystallises down into five or six bullet points, there is no flesh on the bones. The devil is in the detail. Take for example Smith’s reference to how he would like to build more colleges like Nantgarw College. What does this actually mean? For all I know, he might want to build lots of colleges through the private finance initiative, and we know there have been problems with legal liability (e.g. crumbling schools in Edinburgh) on this as well as the huge unconscionable cost of PFI. Under the same breath Smith talks about rebuilding the social infrastructure, but what on earth is he referring to? The consensus from finance specialists is that the demand for PFI has hit its peak, leading to the necessity of diversification of financial products to be sold by the City of London to an unsuspecting and gullible state, eased by compliant, gullible or fraudulent politicians. “Social impact bonds” are the new future now, but the results on the whole have been very underwhelming. And one is left wondering with Smith really is up to the job – for example does Smith realistically feel that this could avert a crisis in care home provision? Smith talks about “shovel ready projects”.

“Shovel ready” is a political term used to describe construction projects (usually larger-scale infrastructure) where planning and engineering is advanced enough that with sufficient funding, construction can begin within a very short time. But the term is a slogan and very poorly defined as others have noted. 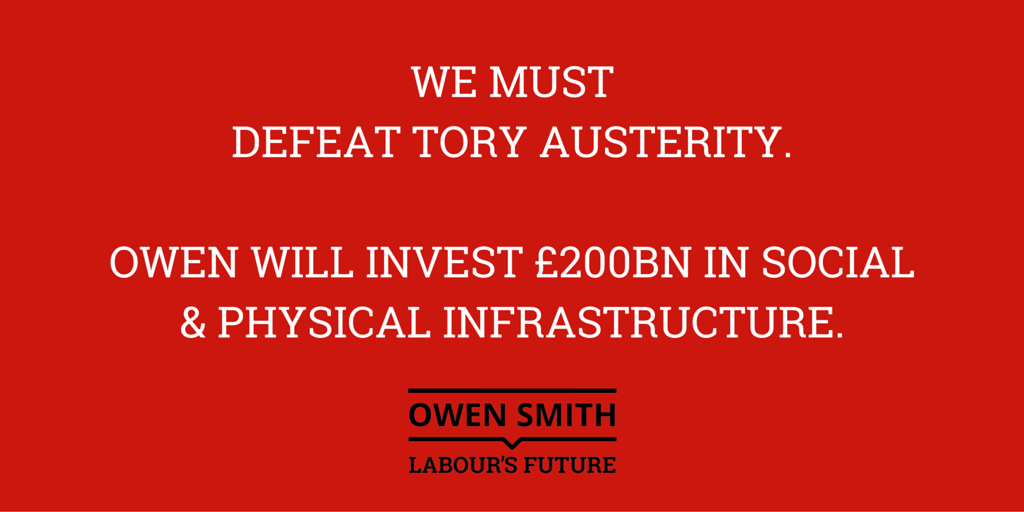 In principle, the money for such huge investment funds must come from somewhere, leaving the possibility that Smith’s economic team (which has no members) will think about leveraging debt or getting money through increased taxation – but if the economy is about to take a nosedive as Project Fear would have us believe post Brexit, the economic case for this is not straight forward, particularly with uncertainty in the future sovereign credit rating of the UK and interest rates.

Like his ‘master’, Smith is in favour of devolution, but he is also keen for UK voters to have another go at answering the EU referendum question in 18 months time. 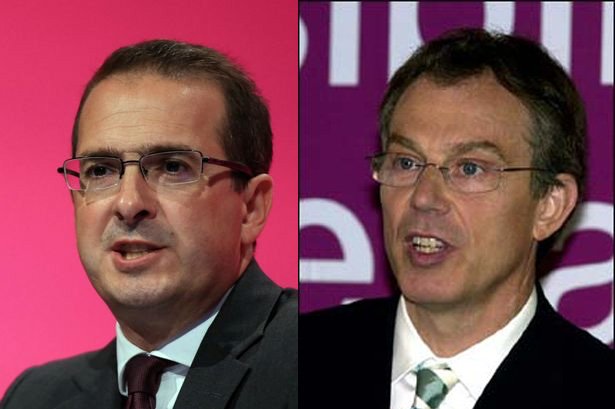 By then, it is possible that France has cajoled the UK into detonating Article 50 via the executive of the UK, i.e. the Prime Minister. Owen Smith MP again resorts to the slogan of the British people ‘signing off’ the #Brexit result, whereas under Article 50 the “decision” has to be relayed somehow to the EU, and that decision could in fact be made by the Royal Prerogative entirely with the (first) EU referendum result as advisory. 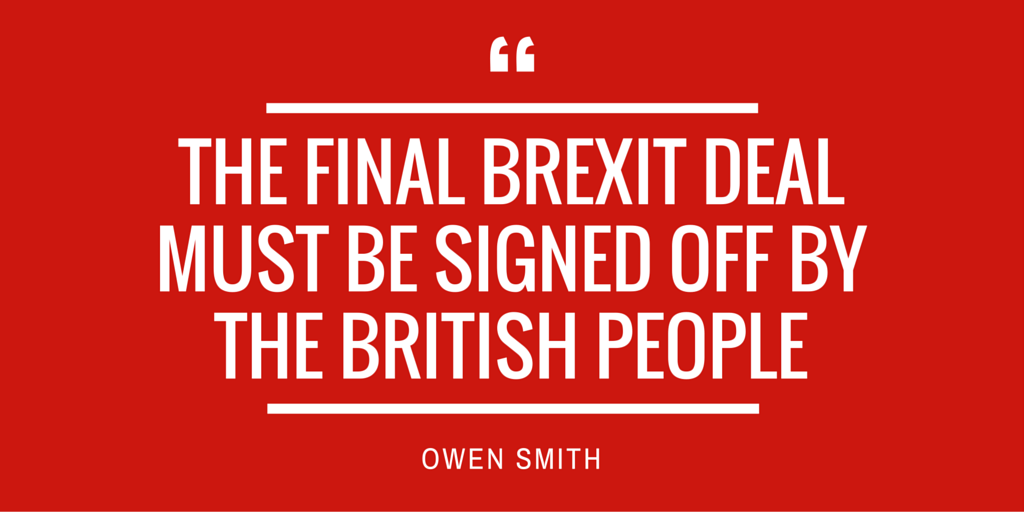 And this would be a relief to those #Brexit voters who just want to get on with it, knowing full well the possible Project Fear repercussions. There’s an argument that if it were not for London, Northern Ireland and Scotland, the UK would have overwhelmingly voted for Brexit.  Again, Smith is likely to be foiled by detail. Whereas on the whole Scotland did not vote for #Brexit, there is a good reason why Scot Nats might want Brexit, and that is to trigger a second Scottish referendum via Nicola Sturgeon. The perception therefore is that devolution, much promoted by Blair, could end up accelerating the break up of the Union under Smith’s “watch”. Smith cannot promise the unlikely prospect of break up of the Union in the same way he cannot make Jeremy Corbyn ‘president’ of the Labour Party: firstly, it is not in his gift to give as this requires a high level rule change from Labour, Jeremy Corbyn is widely reported to hate that particular phoney title, and the job doesn’t exist in the first place.

John McDonnell MP’s name might be mud amongst a population within Labour, but his track record on finance is actually quite good. His CV includes a spell as deputy leader of the Greater London Council to Ken Livingstone and as chair of finance overseeing its £3bn budget. So while McDonnell is perhaps easily caught off guard with loose talk in public meetings, his relative competence compares to the utter chaos of Owen Smith MP on the economy. As Gordon Brown MP once put it, this is no time for a novice. Owen Smith MP can’t even agree with Yvette Cooper MP on the extent to which increased spending caused “the deficit”. The economic competence of Labour we know is a problem, as well as personal poll ratings (though we have learnt not to trust the polls of late). Cooper in the last year’s leadership hustings used to say in a totally exasperated way, “it wasn’t the deficit which caused the Crash, it was the Crash which caused the deficit” – this will be news to Owen Smith MP.

In yet another slogan, Smith talks about the need to ‘not just save banks but people’, skirting round the issue that if people weren’t able to withdraw money from banks they would be totally stuffed. 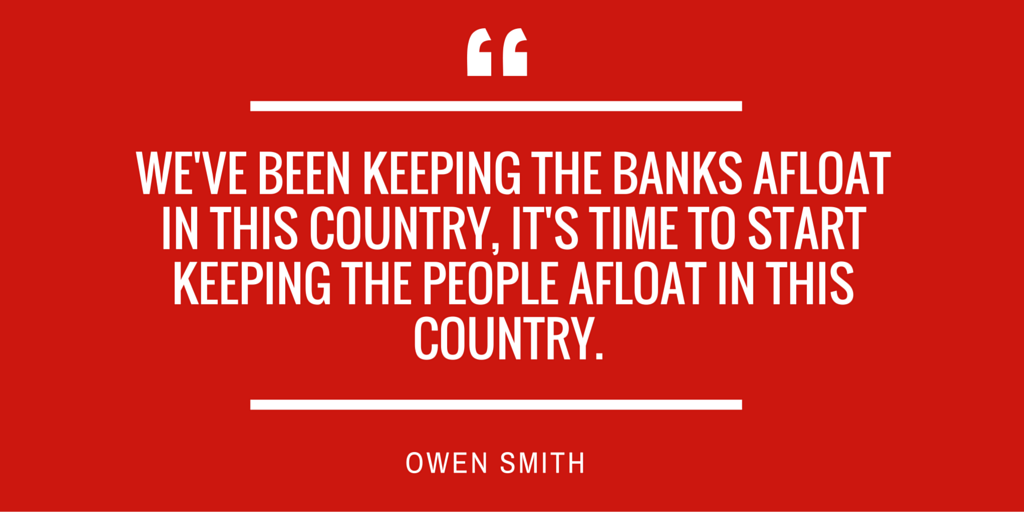 The vast majority of the current cohort of Labour MPs are mediocre (and that’s a generous appraisal). They sit on their hands during Prime Ministers’ Questions, and can’t even be arsed to support their democratically elected leader. They either remain stony silent or jeer at him. They happily produce snide remarks before somebody sensible produces a serious point of order, such as Andy Burnham MP shadow home secretary on #Oregreave. Burnham is an authentic leader, in that after being burnt over Hillsborough, he went back to activate an inquiry for which many are eternally grateful – Burnham despises abuse of power and mass cover-up from previous Conservative administrations. In any other walk of life, people do not have ‘jobs for life’. So there is no intuitive reason why Labour MPs acting like ‘independents’ rather than on a common Labour ticket should not have to apply for the new jobs which come up in 2020. The ‘boundary changes’ impose totally different geographical boundaries, and if the current crop of Labour MPs are good enough they should have nothing to worry about. Quite frankly, the vast majority of them are not good enough, in total contrast to Jo Cox MP who was tragically murdered, if their non-attendance at John McDonnell’s opposition debate on the economy is anything to go by. Owen Smith MP is seen as the figurehead of a deeply unpopular parliamentary party (judged from the perspective of the current membership), so he is not in a winning position, as evidenced by the finding that Corbyn’s poll rating in the leadership elections is currently double that of Smith (but Labour is still viewed as being unlikely to win the next general election in such polls.)

A section of the parliamentary party has been gearing up to this in the last 9 months, despite notable successes in local elections and on policy (e.g. personal independent payment, working tax credits). Look at how Kendall, Cooper and Umunna even in solidarity with themselves chucked their toys out of the pram even before day 1 of an actual Corbyn leadership. As Steve Richards says, “it’s clear the leader can’t work with the party, and the party can’t work with the leader.” Owen Smith MP has vehemently promised that the Labour Party won’t split on his watch (but he vehemently about a month ago denied he would run for leadership of the Labour Party.) So if we take Owen Smith MP at face value, unlikely though that is, Labour MPs should want “to do the right thing” and not clog up valuable jobs as MPs for the Labour Party in 2020.

If Owen Smith MP is the best candidate the Labour PLP can up with, it’s worth scrutinising for a moment looking at what’s gone wrong in “Labour Youth”, i.e. Progress and the Fabians [#seewhatIdidthere]. If Momentum is merely a “personality cult”, and not a social movement, it makes the personality cults of Martin Luther King and Mahatma Gandhi look no less impressive. Corbyn went out of his way to mention other members of his shadow cabinet, such as the brilliant Angela Rayner MP, and it is indeed staggering Corbyn is still able to carry on despite being ostracised by the PLP in stereotypical bullying tactics.

Things don’t look as if they’re going to get better for ‘more Blair than Blair’ Owen Smith MP.

← Owen Smith is ‘reconstituted Labour’, but still a disastrous recipe The Parliamentary Labour Party cannot cope with the decline and yet further decline of New Labour →
Click to listen highlighted text! Powered By GSpeech