Home » Politics » How badly does Ed Miliband want the job?

How badly does Ed Miliband want the job?

By shibleyrahman in Politics on November 14, 2014. 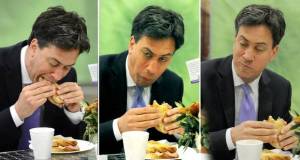 Ed Miliband has often remarked that he views his pitch for being Prime Minister being like a job interview. This is not a bad way of looking at the situation he finds himself in, one feels.

The “elevator pitch” is a construct where you’re supposed to sell yourself in the space of a short journey in an elevator. What would Ed Miliband have to do to convince you that he means business?

This question is not, “Would you like to be stuck in a lift with Ed Miliband?”  But that is undoubtedly how the BBC including Andrew Neil, Andrew Marr or David Dimbleby would like to ask it.

On Facebook yesterday, Ed presented his potted ‘here’s what I stand for in four minutes’ pitch.

It’s here in case you missed it.

Presumably advisers have recommended to Ed in interviews that he must look keen to do the job. But presumably there is a limit to looking ‘too keen': i.e. desperate.

Ed being given the job depends on what the other candidates are like: and Nigel Farage, Nick Clegg and David Cameron are not the world’s most capable candidates.

It’s said that most HR recruiters ‘google’ the candidates before shortlisting. Will Ed Miliband survive the stories about him eating a butty? Or being public enemy no. 1?

Does Ed Miliband have issues he wants to bring to the table?

Yes he does: repeal of the loathed Health and Social Care Act (2012), abolition of the despised bedroom tax, a penalty for tax avoidance, and so on.

Will the media give him a fair hearing?

Does Ed Miliband have a suitable background? Well, he got at least a II.1 – this is all anyone seems to care about these days. (I, for the record, think that the acquisition of a II.1 in itself is meaningless, but that’s purely a personal opinion.)

Would Ed take the job if offered it? Yes.

Will he have OK references? Not if you ask Andrew Marr, but if you ask somebody like James Bloodworth, Sunny Hundal, or Dr Éoin Clarke, yes.

Can Ed return something to his stakeholders? Possibly more than David Cameron can return to his. All Ed has to do is to win.

It’s going to be difficult. This general election on May 7th 2015 is incredibly unpredictable. The main factors, apart from Ed Miliband’s two critics, are whether the LibDem vote will collapse, how well UKIP might do, whether Scotland will be a ‘wipeout’, and so on.

But Ed Miliband’s government repealing the Health and Social Care Act (2012) is far more significant than whether he can eat a butty.

← Culture and diversity in living well with dementia A lot more unites us in English dementia policy than divides us, potentially →
Click to listen highlighted text! Powered By GSpeech