Angela Eagle had branded herself with no expense spared under the brand of “Real leadership“. It has been heavily pumped out that, like Falstaff in Henry IV Part I, Angela has an unique ability to reach people. 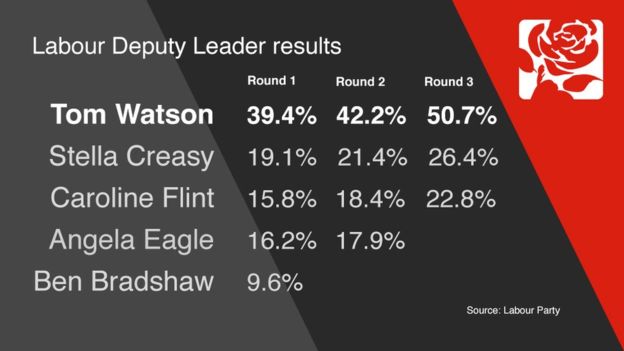 Angela Eagle’s leadership launch yesterday pointed the way to a leadership style that is far from ‘real’. It was heavily stylised and branded, and attracted various remarks such that Eagle was presenting a brand new daytime TV show.

Branding is notoriously used by marketing professionals to convey a brand identity and brand values, but the brand identity was at best confused – pink reflecting Harman’s buses, but not the deep red of the Labour rose.

Instead, the over the top highly polished marketing conveyed a brand identity of style versus substance, with very little in the way of content. 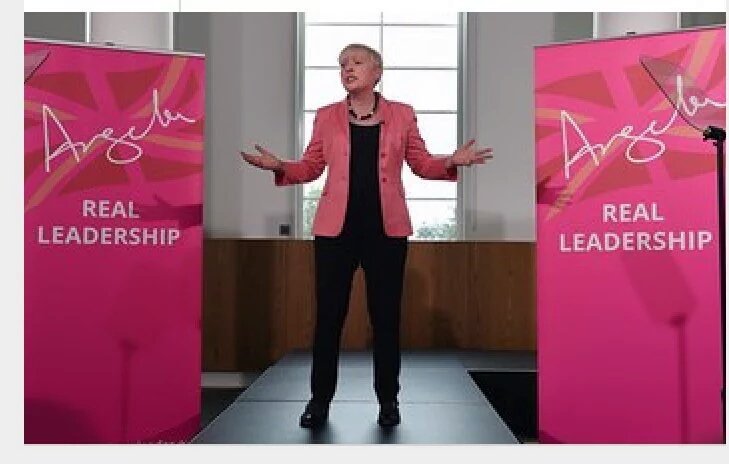 The huge placards were a great attempt at personal branding, but the confused signature of Eagle seemed to spell out the word ‘Arrrgh’ for many. After the highly contrived whoops and wolf whistles reflecting a cappucinoed-up audience, Angela Eagle looked as if she was about to present an item on how she got over walking out on her partner without any warning, with a special item on making an offer for your first house to follow. The script felt like someone had built it essentially from regular use of ‘copy’ and ‘paste’ buttons with someone mentally thinking humble background TICK comp TICK Oxford TICK socialism TICK.

With very little in the way of substance on anything, such as the role of stakeholder involvement in the economy, or the importance of the NHS, one was left wondering whether such a trite offering was the natural end point of the ‘death by focus group’ culture of New Labour, so well described in Philip Gould’s “Unfinished Revolution”.

History repeated itself. The same criticisms of the New Labour spin machine was vividly tangible in the Eagle pitch.

‘Campaign’ on the decline of the New Labour brand:

“Yet the actions of Labour’s spin doctors caused serious concern among senior advisers. In a memo written by Gould and leaked to the press in 2000, he warned that the government had been “undermined by a combination of spin, lack of conviction and apparently lack of integrity”. He concluded: “The New Labour brand has been badly contaminated.”

The rapid decline of the political brand that is “New Labour” is extensively and elegantly described elsewhere.

Lily Allen (@lilyallen) even likened it to Eagle  launching a brand new brand of perfume. 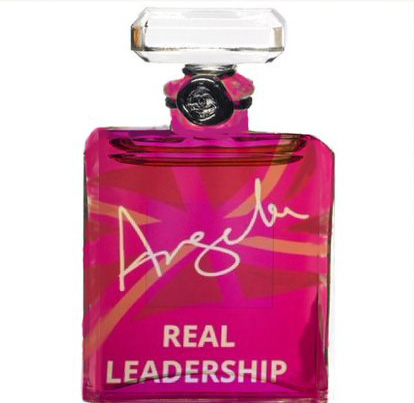 One sharp Twitter observer pointed out it probably “smelt of the sweet smell of defeat”.

The actual content of the speech in the end was bland and contrived. It was delivered with excessive hand gesticulations that was worthy of someone who clearly felt uncomfortable at public oratory.

Eagle pointed out inanely as she regularly does how Corbyn preferred, on the other hand, to operate “behind closed doors”, when there is clearly photographic evidence to the contrary. 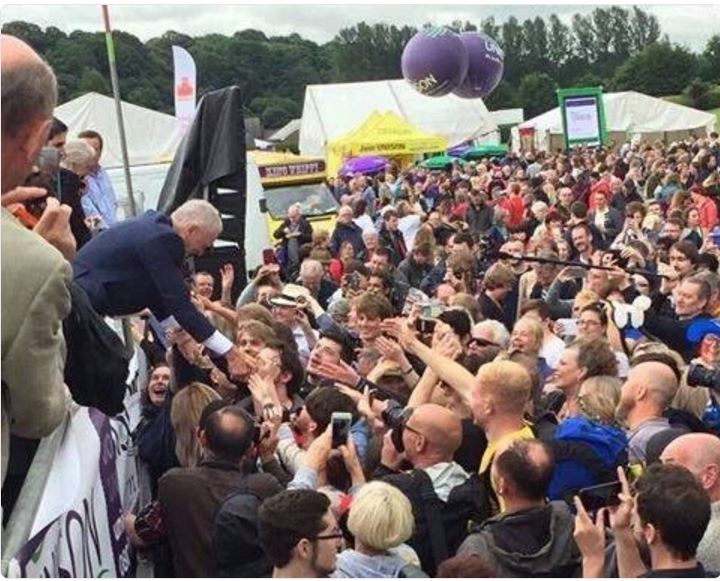 And there’s the rub.

Authentic leadership is an approach to leadership that emphasises building the leader’s legitimacy through honest relationships with followers which value their input and are built on an ethical foundation. This statement can only hold true for Eagle if she is only referring to some of the parliamentary Labour Party, not the vast army of the grassroots activists who resent the coup. Generally, authentic leaders are positive people with truthful self-concepts who promote openness. The perception of the coup is Hilary Benn MP flagellating with Jeremy Corbyn MP in an early morning conversation about how many signatures Benn had amassed of people who had ‘no faith’ in Corbyn’s leadership.

Deeper scrutiny of the concept runs into the buffers.

Because the concept itself is not yet fully mature in a theoretical sense, there are many different definitions of authentic leadership, each with its own nuances. A consensus appears to be growing that authentic leadership includes these distinct qualities:

Another facet greatly undermining Eagle’s claim to be ‘real’ is her real U-turn from a missive which she herself sent out in the Deputy Leader contest last year.

I said today that the political elite need to lay off Jeremy Corbyn.

I would happily serve under anyone the members choose to be our leader. Why? Because I respect the wisdom of our members, supporters and affiliates and our Party’s process of electing a new leadership team. Every candidate has the right to be heard and put forward a vision for Labour’s future and, whether you agree with Jeremy Corbyn or not, he is in the race and is entitled to participate.

So the talk of coups, remarks about not serving in Shadow Cabinets and former Prime Minister’s telling people to get ‘heart transplants’ need to stop now.

When I launched my Deputy Leadership campaign I said that I want to unite the Labour Party and focus our efforts on defeating the real enemy – the Tories.

I am a proud trade unionist but I’ve never been in any faction and I’ve always been loyal. I’ve never been afraid to speak out when we got it wrong either, like I did over Foundation Hospitals or University Tuition Fees and that is why I am speaking out now because the public attacks are only helping our political enemies.

Let’s debate but let us do it with respect. If I am elected Deputy Leader, there will be a place for all views and opinions in the Labour Party. I’ll make sure of that by uniting us and preparing us for the battles ahead.

I hope you will join my campaign and together we can build a movement that we can all be proud of.

It is well known that there are many people who voted for Angela Eagle to be deputy leader because of her promise to back specifically Jeremy Corbyn, and er dismissal of coups.

Colour is an important cultural consideration, and one can assume that Angela Eagle’s choice of pink was not a gratuitous example of #everydaysexism but was an intention to reflect a cultural stereotype.

Labour’s controversial use of pink is well known from the pink buses used to garner the female vote for Labour in the 2015 election campaign, espoused by a certain Harriet Harman who happened to be sitting in the audience in her failed ‘Woman to Woman’ campaign. Previously female van drivers interviewed by BBC Newsbeat gave the van a cool reception, with one saying “It’s a bit patronising and seems like a bit of a cop out”. 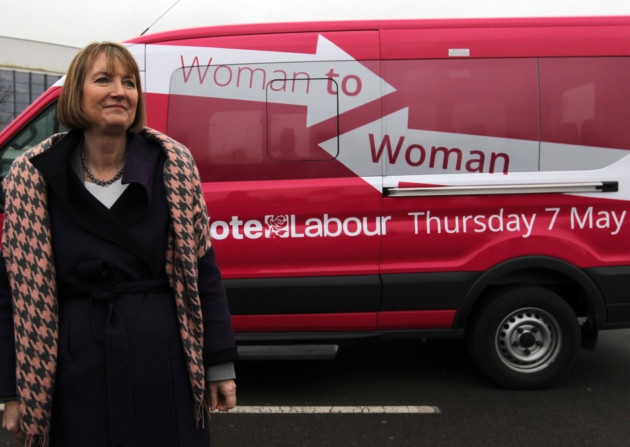 All of this was a huge contrast to Theresa May MP yesterday who started the day as one of two Conservative leadership candidates, and ended the day as Prime Minister in waiting. I thought her speech in the morning was challenging and interesting, articulate and inclusive, in equal measure, and in fact reminded me of Ed Miliband’s speech to the Labour Conference on ‘responsible capitalism’. You felt in fact the hand of Lord Stewart Wood in the theory behind this speech – both Wood and Miliband had maintained an interest in co-determinism, having stakeholder representation on management boards, in Germany, from their university days at the University of Oxford.

Take for example this passage which concerned essentially Ed Miliband’s notion of ‘predatory capitalism’ (and for which Miliband attracted much derision at the time).

“Because as we saw when Cadbury’s – that great Birmingham company – was bought by Kraft, or when AstraZeneca was almost sold to Pfizer, transient shareholders – who are mostly companies investing other people’s money – are not the only people with an interest when firms are sold or close. Workers have a stake, local communities have a stake, and often the whole country has a stake. It is hard to think of an industry of greater strategic importance to Britain than its pharmaceutical industry, and AstraZeneca is one of the jewels in its crown. Yet two years ago the Government almost allowed AstraZeneca to be sold to Pfizer, the US company with a track record of asset stripping and whose self-confessed attraction to the deal was to avoid tax. A proper industrial strategy wouldn’t automatically stop the sale of British firms to foreign ones, but it should be capable of stepping in to defend a sector that is as important as pharmaceuticals is to Britain.

And I want to see changes in the way that big business is governed. The people who run big businesses are supposed to be accountable to outsiders, to non-executive directors, who are supposed to ask the difficult questions, think about the long-term and defend the interests of shareholders. In practice, they are drawn from the same, narrow social and professional circles as the executive team and – as we have seen time and time again – the scrutiny they provide is just not good enough. So if I’m Prime Minister, we’re going to change that system – and we’re going to have not just consumers represented on company boards, but employees as well.”

The contrast between Labour and the Conservatives could not have been greater for me yesterday. In contrast to the Conservatives appointing a new leader for one who had resigned following Brexit, Angela Eagle’s team was deliberately contriving every possible way possible to get Jeremy Corbyn off the ballot. Such manipulative Machiavellian working has a result, of course, which is the complete anethema to democratic socialism. It would be highly objectionable, if only for reasons of natural justice, to exclude the incumbent from applying for his own job. Besides, the rule book could not be clearer on the need for nominations from ‘challengers’ – and whatever your view of the rules of statutory interpretation, it is hard to call Corbyn a challenger to his own job.

Thankfully for the Labour Party Theresa May has already decided not to go for a ‘snap election’, presumably as she would like time for her leadership to take effect while negotiating Brexit as a ‘reluctant brexiteer’. She has a limited two year time window put in place by the legal mechanism of Article 50, that is the notification of the UK to the EU of its intention to leave the European Union. So, despite any wishes from the Daily Mirror or MPs seeking a ‘fresh mandate’, it is very likely Labour will have until the first Thursday of May 2020 at the very least with a leader – but for the antics of Hilary Benn, the parliamentary Labour Party would not be in the laughing stock situation of being ‘stuck’ with Jeremy Corbyn, a brand they have tried to rubbish at all opportunities, rather than a MP they could have worked with despite difficulties in solidarity, for years. It is impossible, one thinks, that Angela Eagle could have known that Theresa May had delivered such a powerfully left-centre speech that morning. It was humiliating for core longstanding Labour voters that Angela Eagle’s speech was politically positioned much further right than Theresa May’s that morning. With Theresa May having so convincingly parked her tanks on Ed Miliband’s political lawn, the Corbyn option is extremely well positioned now actually.

But the parliamentary Labour Party have dug their own grave. It remains to be seen what, if anything, Owen Smith can bring to proceedings. Anyway, Angela Eagle’s launch was contrived, superficial, bland and uninspiring.

And best summarised by her Question/Answer session.

← The emphasis of Hilary Benn on “winning” ironically explains a lot Labour’s failure Why the level of vitriol against Jeremy Corbyn? →
Click to listen highlighted text! Powered By GSpeech