Drop the Bill – HM Government must publish the Risk Register

By shibleyrahman in Latest News on February 5, 2012. 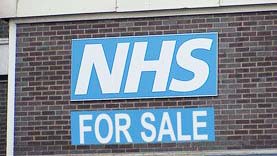 In November 2011, as described in the GP magazine, the Information Commission ruled that the Department of Health breached the Freedom of Information Act by failing to provide a copy of the risk register requested by former shadow health secretary John Healey. The Department of Health’s response to why they would not wish to publish the Risk Register is provided in this blog article. The analysis provided in this letter is markedly at odds with Andrew Lansley’s own headline of an article published in the Guardian in 2010 here: “An open, transparent NHS is a safer NHS”.

In ‘Any Questions’ on Friday evening, Tim Farron himself discussed the improvements in the Bill which had resulted as a result of the Liberal Democrats’ intervention, citing the influence of Shirley Williams and Paddy Ashdown, and explained that he was not in favour of marketisation of the NHS. He further explained that he wished for stability, and did not wish for ‘doctors and nurses to be mucked around by politicians’. Indeed, Nick Clegg has previously provided that the intervention in the NHS legislative process is a victory for the Liberal Democrats in the democratic process.

Neil Foster on the highly influential ‘Liberal Conspiracy’ website has written as follows:

Many Coalition MPs and Ministers will be wondering how they can save face and pull back at this late stage.

There is one way: publish the Department of Health’s Risk Register. The unpublished advice and projections in the Risk Register are likely to reveal an array of unknowns and significant potential for spiralling costs and deterioration of patient care.

If not, then why is the Health Secretary so keen to avoid the instructions of the Information Commissioner to release it?

The ‘last-minute revelations’ from the Risk Register should enable Coalition MPs to say with a reasonably straight face that they have taken on board the warnings alongside those of the Health Select Committee.

However without the publication of the Risk Register there is no plausible exit strategy for MPs who have ignored pressure to repeatedly vote for such a controversial Bill.

The EDM reads as follows on the UK parliament website:

That this House expects the Government to respect the ruling by the Information Commissioner and to publish the risk register associated with the Health and Social Care Bill reforms in advance of Report Stage in the House of Lords in order to ensure that it informs that debate.

The details of this EDM are as follows. As you will see, despite the problems with the parliamentary system of whipping allowing the Liberal Democrats to stand up for the views on the NHS, a number of Liberal Democrat MPs have indeed put their name down.

At the time of publication, the following MPs had signed up:

For an excellent article from Thursday on this, please refer to Eoin’s blog here.

Andrew Lansley has concealed a ‘risk report’ that has examined the potential dangers of his NHS Bill. He simply refuses to publish it. I am told that the reason for this is that the report contains a very serious warning about the long term damage the bill will do to the NHS. The chief warning in the report is that Lansley’s reforms will spark a surge in health care costs and that the NHS will become unaffordable as private profiteers siphon off money for their own benefit. The report specifically warns that GPs have no experience or skills to manage costs effectively.  The profit element contained in Lansley’s reforms is the chief reason for the report citing these worries. This is the reason Lansley refuses to publish the report, because he has claimed that his bill will make costs in the NHS more affordable. This flaw in the bill if exposed would undermine his entire argument and it is the reason the report will not be published until the bill becomes law. But you can help prevent that. Labour Left Chairperson & Labour MP Grahame Morris has tabled an early day motion to force Lansley to publish the report. Please help ensure that your MP does their bit to support the motion. Democracy & transparency must prevail.

← What's in a cover letter? A practical guide for law training contract and vacation scheme placements. Book review of "You can't read this book: Censorship in an age of freedom" by Nick Cohen →
Click to listen highlighted text! Powered By GSpeech