Home » Dr Shibley Rahman viewpoint » Nick Clegg is bound to defend the Tory record, as he's a Tory. It doesn't matter to us.

Nick Clegg is bound to defend the Tory record, as he's a Tory. It doesn't matter to us.

By shibleyrahman in Dr Shibley Rahman viewpoint on September 17, 2013. 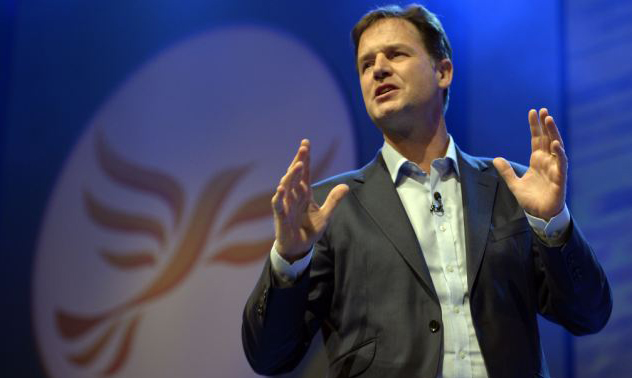 It is beyond delusional that Nick Clegg is proposing to the voters of Britain that British voters are better off with a coalition government, with him as a permanent fixture as the Deputy Prime Minister. It may be spun that ‘behind the scenes’, he is known to favour David Cameron as he has worked with Cameron, but seriously? You must have surely worked with people that you’ve come to hate? It is, rather, well known that Nick Clegg is a Tory. He is utterly spineless, and has no liberal principles of his own. That is why many people serious about Liberal values have left in droves – or rather hundreds of thousands. Liberal does not mean snoopers’ charters. Liberal does not mean control orders. Liberal does not mean secret courts. Liberal does not mean propelling competition to be the overriding principle of a NHS which outsources as much as possible to the private sector, when the Liberal Democrat’s own constitution emphasises the principle of collaboration.

The question is: what will it take to get rid of Nick Clegg finally? Thanks to the legislation of the fixed term parliament, we already know that he will have to honour his promise to go the full distance. Vince Cable may offer sunny uplands in the form of the Coalition early, but it is merely a mirage. Many activists are worried about armageddon, which is widely predicted for the European elections. Oakeshott will be there to tell you he told you so, and Nigel Farage will yet again be the new messiah. However, none of this fundamentally changes anything. Nick Clegg is a Tory, and what he wishes to do after May 8th 2015 is utterly irrelevant.

Do people really care whether he wants to be in a Coalition with Ed Miliband? I strongly suspect Ed Miliband doesn’t wish to work with Clegg in a million years. The practical issue is inevitably how Nick Clegg is going to lead his party to vote with Labour to reverse a series of legislative steps from the present Coalition. It is inevitable that Labour will have to repeal the Health and Social Care Act (2012), and given the strength of feeling one cannot conceivably imagine LibDem MPs will now be whipped to vote against the legislation they originally delivered. Whilst it is common currency that most politicians are ‘professional’ and do what they are told, irrespective of what the country feels, Norman Lamb had no problems in implementing a £3bn top down reorganisation of the NHS when the political priority should have been to implement as soon as possible the Dilnot recommendations over the future of social care.

Say you’d submerged the Concordia, would you attempt to take credit for lifting it out of the waters? Say you’d driven a high speed train in Spain off the tracks, would you attempt to take credit for finding the ‘black box’ recorder? Nick Clegg incessantly criticised the economic policy under Gordon Brown and Alistair Darling in the dying days of the the final recent Labour government, and did his best totally to misinform the public. It could be the case that Labour did a dreadful job in explaining how the £860 billion was deemed ‘necessary’ in keeping the banks afloat, whilst maintaining a record level of satisfaction in the NHS. However, Nick Clegg, Simon Hughes and Danny Alexander did a splendid job in a coalition of lies with George Osborne and David Cameron in arguing that Labour had bankrupt the UK and we were close to the Greek situation. It is therefore not a great achievement that we have a feeble recovery. The argument that ‘Ed Balls does not even agree with Ed Balls’ has not reached lift off despite the best peddling from Tim Farron and Nick Clegg, and the BBC, because the facts speak for themselves. Whilst they proudly boast that the UK economy did not have a double dip or triple dip, it is incontrovertible that the UK economy had actually been recovering in May 2010.

So what Nick Clegg wants is irrelevant. In as much politics can be politicised, Clegg has become a figurehead for anger amongst a wide variety of issues important to Labour voters. While Clegg maintains his stuck record mantra of ‘lifting people out of poverty’, the list of cock ups from Clegg is truly lamentable. It is impossible to know where to start – but you could try the UK economy, the scrapping of the employment support allowance, the shutting of libraries, the scrapping of Sure Start, the scrapping of ‘Building Schools for the Future, and the destruction of the network of legal centres in England. Clegg’s horrific, even if he is a ‘great reformer’ of sorts. He represents all that is fundamentally sick with unprincipled, undemocratic politics. He is a sickening ‘career politician’ who built a brand of ‘no more broken promises’, while breaking a promise he publicly signed a pledge for regarding tuition fees.

Ed Miliband continues to be slagged off by the Liberal Democrat hierarchy, though less so by some on the left of the Liberal Democrat Party. Why should he particularly wish to embrace them as part of the progressive left? The reason he might is that Ed Miliband is a social democrat who doesn’t particularly mind standing up for principles he believes in, even if this means antagonising the Blairite press such as David Aaronovitch or John Rentoul. He called out ‘irresponsible capitalism’ in an universally panned conference speech in Manchester in 2011, much to the ire of the Blairite critics (surprise surprise), but nobody can dismiss how this important concept, passported from the seminal work of Prof Porter at Harvard, has taken root. The ‘transformation’ of ‘reforming’ the public sector in outsourced services has been incredibly unpopular with the general public, who are much better informed than the Coalition politicians would like to believe. You’d have to be on Mars not to be aware of the fraud allegations of A4e, Capita, Serco or G4s.

The public will not give credit to the Liberal Democrats for the economy. They might conceivably give some credit to the Conservatives. And yet the picture of the UK economy is not clear. The total number of people in employment has been rising consistently for many years now, irrespective of who is government. The Conservatives will have real problems in establishing living standards, as the cost of living has risen exponentially due to privatised utilised creaming off profits in the utilities industries. These utilities industries are typical ‘oligopolies’, where the product is virtually the same for the end-user whoever the provider is, prices are kept artificially high by all the providers (but proving collusion by the competition authorities remains virtually impossible), and shareholder profits are shamelessly high. Norman Tebbit have dug out a trench in no foreign ownership of Royal Mail, but there is no such legislation about foreign ownership of the utilities nor indeed the NHS.

Nick Clegg may have been the future once. But he’s now finished.

← Nick Clegg is bound to defend the Tory record, as he's a Tory. It doesn't matter to us. Like a faulty house of cards, the competition rationale for the Health and Social Care has fallen apart →
Click to listen highlighted text! Powered By GSpeech