Home » Dementia » Sticks and stones may break my bones

Sticks and stones may break my bones

By shibleyrahman in Dementia on January 1, 2019.

I had first become interested in the language surrounding dementia in 2014, when I presented a poster on the G8 pitch, at the Alzheimer’s Europe conference in Glasgow.

At that point, I realised that sticks and stones could break my bones, but words could hurt me. 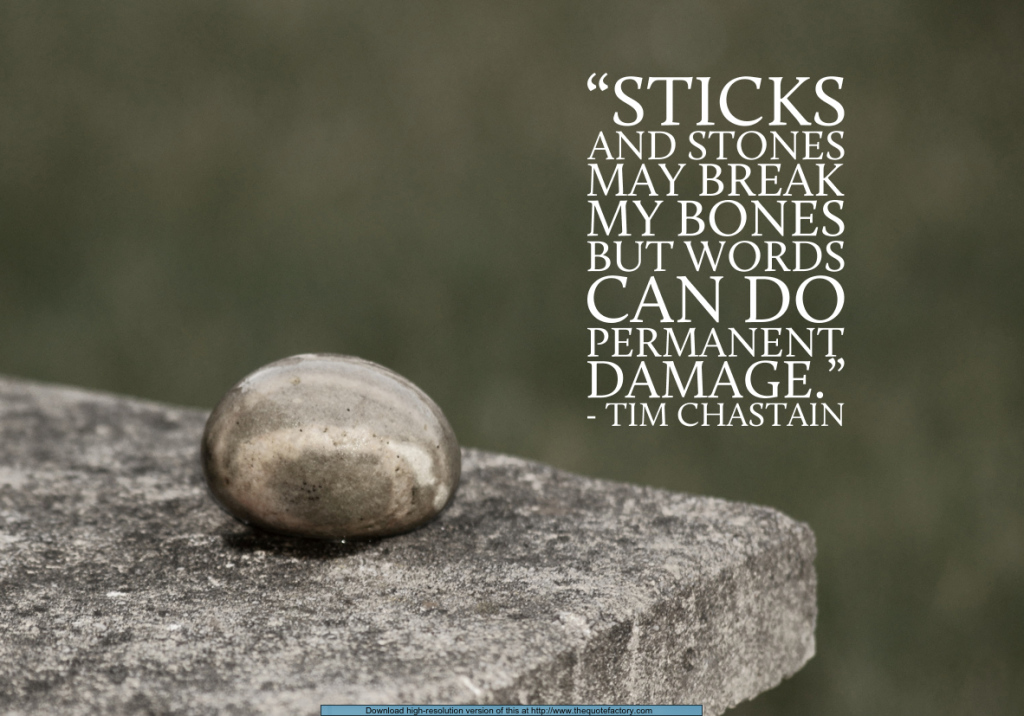 I have long since not attended any national or international conferences, not simply because I found the same topics being discussed in perpetuity, but because I felt the conferences were for an in-house cliques who were far more into massaging their own egos and putting themselves up in flash hotels than the reality of dementia.

But I later returned to the issue of language, in relation to stigma, in my second book on dementia ‘Living better with dementia’ published in 2015 by Jessica Kingsley Publishers. As my own mother lives with me, and as her dementia advances, I’ve genuinely found my own book to be a source of information and support. For example, only last night I was reading up on my own thoughts of the ‘sweet tooth’ in dementia and the neuroscientific evidence for why it occurs. Latterly, I’ve toyed with the idea of writing a cookbook for unpaid carers, living with limited resources including scarce money and time, of people living with dementia. I would love to work with someone who’s interested in this specialist field, such as a nutritionist or dietician, to help me.

I became physically disabled in 2007 after more than a month unconscious on the intensive care unit of a local hospital, where I was invasively monitored for acute meningitis. Although I subsequently read Goffman on stigma about a decade later, I had the misfortune to experience stigma first-hand. The sense of ‘otherness’ is something you experience if you’re in a wheelchair, and a London cab refuses to stop despite the cab having its yellow light on. Of course, I had direct experiences of ‘otherness’ as other medical professionals disowned and excluded me when I needed help the most – both in my alcoholism and in recovery. I am currently doing professional dilemma questions, and the knowledge that senior clinical people I worked with turned a blind eye, or did not know what to do and did not admit it, to my illness still frightens me.

As a result of this, I have a low threshold to calling out ‘otherness’, that is where you define people as different to you, and, more than than that, try to discredit them. This might include supporters of Brexit or not, Jewish or Muslim citizens or not, or even living with a long term condition. I don’t think the key to destigmatising stigma is by segregating people. At worst, this might include the ghettoization of people with dementia or mild cognitive impairment such that they all safely live in the same ‘dementia village’, to all intents and purposes ‘out of sight’ and ‘out of mind’. Care homes used to be criticised, by some, for potentially warehousing individuals if the prescription of chemical or physical restraints was frequently abused, similarly. This is not real integration and inclusion, in other awards appreciating the diversity of individuals, but actually lumping all people together with the same label.

For example, in ‘dementia friendly communities’, we don’t acknowledge individuals have different qualia of cognitive impairments, in memory, language or whatever, at various degrees of severity. We don’t discuss how the social determinants of health impact on the health and wellbeing of people, such as poverty or the shutting of day centres. We just clump all people together as ‘dementia’. This is not a million miles off of creating vast groups comprising unique individuals, such as ‘learning disabilities’ or ‘the elderly’.

Whilst the counter-argument is that identification of these groups of people means that their needs can be serviced, often the opposite is true. Recently, a paper has been published on identifying the most ‘frail’ people so that we can be aware that they are the most intense in resource allocation. But think about this carefully. This can mean that we use the information to discriminate actively against the most vulnerable – ‘equity’ and ‘justice’ are not necessarily compatible ethically.

Above all, I am scared how language is used to legitimise discrimination, ‘otherness’ and to embolden other people’s vulnerabilities and weaknesses.

I did a brief scan of some ‘offending’ words, and I compiled them into a table. 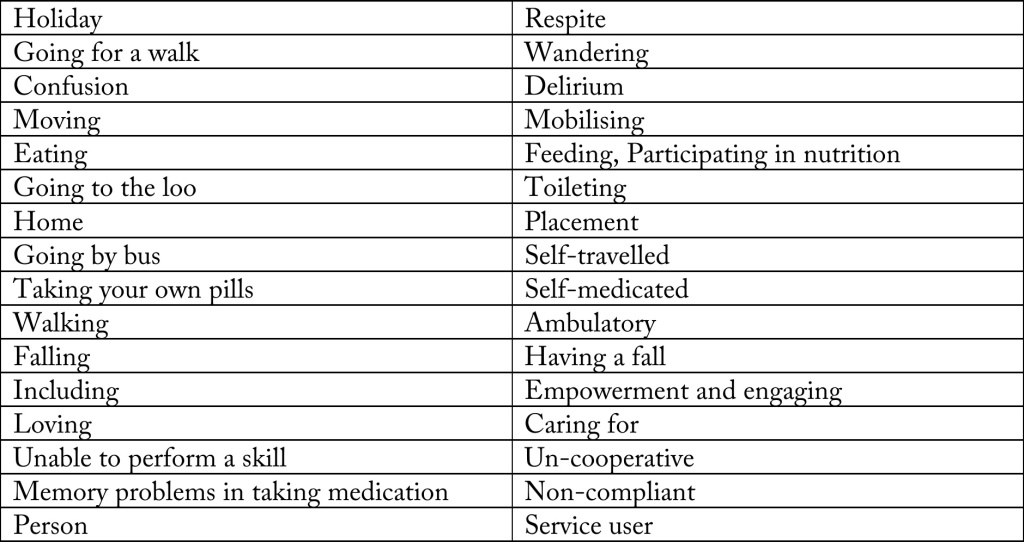 I have been much derided for talking about “assets” and “strengths” as well as “deficits”. For example, one person commenting on a piece I wrote in the Guardian remarked similar to, “We don’t need to worry about this patient lying on the operating theatre table with advanced pancreatic cancer. She has great teeth.” 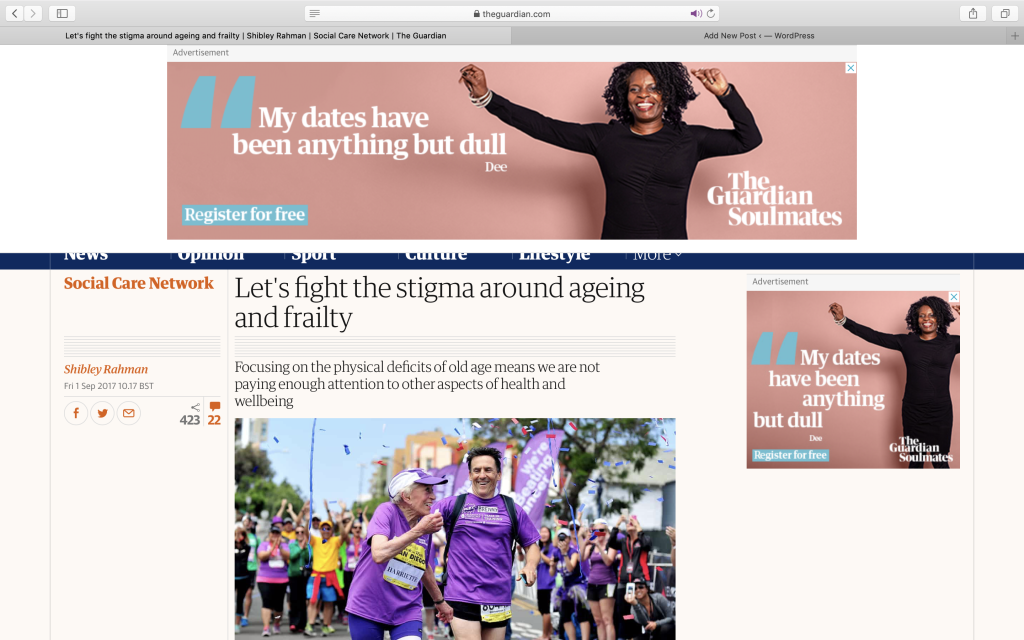 But I strongly believe that it is not difficult to slip into the patronising ‘does he take sugar mentality?’ I don’t wish to turn the medico-legal concept of ‘paternalism’ into a “dirty word”, but, as for our experiences with individuals with special needs, it is a slippery slope to outright dehumanisation and depersonalisation.

I never really understood what it was like to lose your sight until I went blind in one eye last year – but this was surgically operated upon with success. Likewise, I think many of us think we won’t be the ones who get diagnosed with cancer or dementia. But the law of averages means that some of us will be.

And we should think about how “we” would feel if “other people” talked about “us” like that.

← The morality of dementia ‘awareness’ while imposing swingeing cuts Time for the discussion of Brexit to get beyond hashtags and internal bickering →
Click to listen highlighted text! Powered By GSpeech